Protests Outside UN Over Pakistan Army's Atrocities In Balochistan, Sindh

Protesters raised their voice against "genocide" and brutal Pakistani military operations, enforced disappearances, torture and killings of civilians in Balochistan and Sindh. 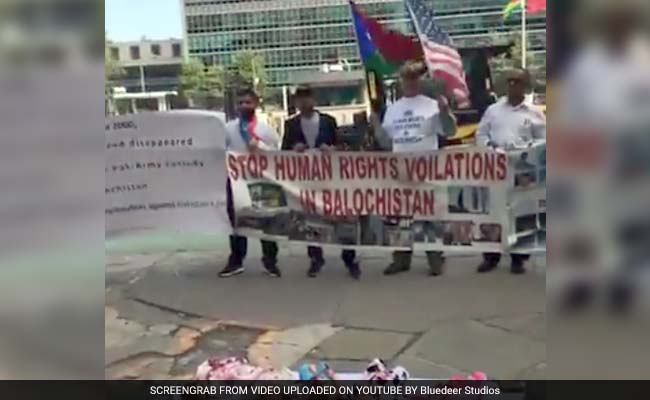 United Nations: Members of the Baloch and Sindhi community today held a joint protest outside the UN headquarters against atrocities and human rights violations by Pakistani security forces in Balochistan and Sindh.

Nabi Bakhsh Baloch, secretary general, BNM-North America stated that the ongoing Pakistani military operation in the Kolwah area of Balochistan has resulted in fatalities while a large number of residents were taken away by soldiers who also set fire to their homes and properties.

"For the record, this scenario is not about Myanmar or Rohingya Muslims but Balochistan where Pakistan's army is committing genocide (against people in Balochistan and Sindh)" he said.

In a joint memorandum submitted to the UN Secretary General, BNM and JSQM urged the world body to urgently take action against Pakistan army's "war crimes" committed against innocent civilian populations and the political dissent in Balochistan and Sindh.

Promoted
Listen to the latest songs, only on JioSaavn.com
"People of Sindh and Balochistan demand for an urgent UN intervention to stop the Pakistani state atrocities, gross human rights violations and crimes against humanity committed against civilian populations," the memorandum said.

"Suffering families ask for the return of thousands of Baloch and Sindhi missing persons illegally taken away by the Pakistan army in the last several years. UN should send a peace and human rights mission to Islamabad to find ways to end all military operations in Sindh and Balochistan," the joint memorandum said.