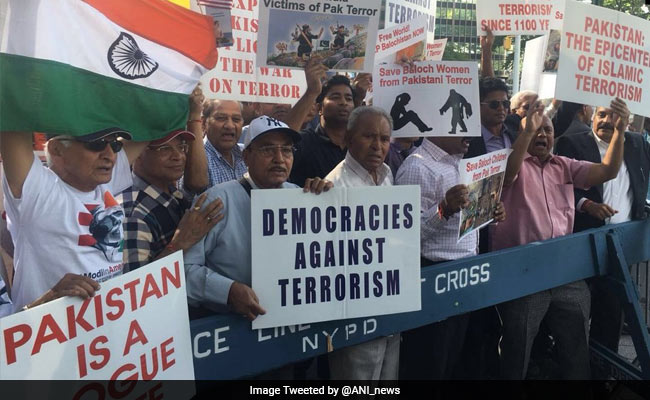 United Nations: Several Baloch and Indian activists held large-scale demonstrations outside the UN headquarters here while Pakistan Prime Minister Nawaz Sharif addressed the UN General Assembly as they were joined by other groups demanding that it stop "exporting" terror into India.

The protestors converged across the street from the world body's headquarters to condemn atrocities and human rights violations by Pakistan just as Mr Sharif was addressing the General Debate of the General Assembly.

The crowd shouted slogans of 'Free Balochistan', 'Down Down Pakistan', 'Save World from Pakistan Terror' as they waved banners and placards that read 'US Government stop giving funds to Pakistan', 'Kashmiri Hindus are Humans, Wake up to their sufferings', 'Remove Pakistan from the UN', 'Stop Atrocities in Pakistan-occupied Kashmir' and 'Killing Fields of Pakistan - Sindh and Balochistan'.

He said Pakistan and its leaders are committing crimes against the residents of Kashmir, demanding that the country stop "exporting terror and let its neighbours live in peace".

He added the Pakistani leadership should respect the right to self determination of the Baloch people.

He slammed the Pakistani army for its brutalities against "innocent Balochis", saying "the Pakistan Army is ISIS in uniform".

The Baloch National Movement (BNM) condemned the Pakistani atrocities and the 'ongoing military operations' in Sindh and Balochistan.

"Baloch and Sindhi people appeal to the freedom loving citizens of America and the world to support our demands for freedom, peace, and justice. We, the victims of Pakistani state aggression and crimes against humanity, want to tell the world that 'Pakistan is a nuclear-armed terrorist state' and must be stopped," the group said.

Condemning the "barbaric" terror attack on the Uri camp in Kashmir and Pathankot air base, BNM said such attacks are part of Pakistan's policy of "aggression, employing terrorist methods and outfits to escalate war in the region".

It said the Baloch people are grateful for the support extended by the Indian Prime Minister at "such a critical juncture when our nation is struggling to be free from the illegal military occupation of Pakistan since 1948".

Promoted
Listen to the latest songs, only on JioSaavn.com
Jayesh Patel, the former President of the Overseas Friends of BJP, said Pakistan should stop terrorism against India, saying countless innocent lives have been lost due to attacks in Kashmir, mostly recently on the army base in Uri that killed 18 soldiers.

"The families of our soldiers are the worst sufferers," he said.