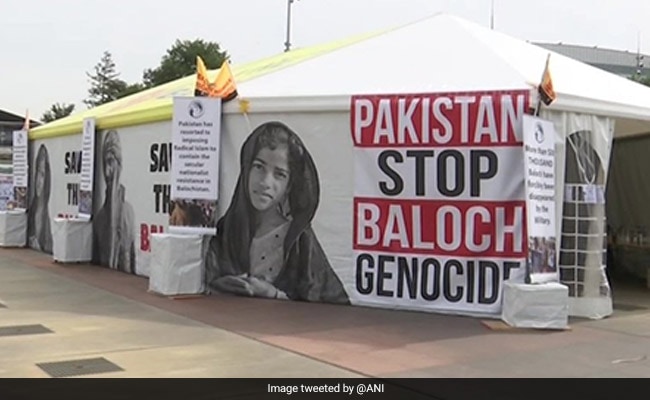 Baloch political activists and human rights defenders shredded Pakistan for atrocities and gross human rights violations against Baloch people. The Baloch Human Rights Council organised a briefing on 'The Humanitarian Crisis in Balochistan' at a special tent at Broken Chair in front of the UN headquarters in Geneva on Tuesday.

In the briefing, the activists stated how the Pakistani army continues to torture people and carry out operations in Balochistan, which has also lead to a massive increase in the number of enforced disappearances across the region.

Speaking to news agency ANI, Nabi Bakhsh Baloch from the US-based Baloch National Movement said, "Until Pakistan has its foot in our territory, Balochistan will never be at peace."

"Shah Mahmood Qureshi (Pakistan's Foreign Minister) will never reveal what atrocities are being committed by Pakistan there (in Balochistan). That is why we are here. Who will listen to our voices if we come out and speak," the activist stressed.

The activist highlighted how the world can see the what Pakistan is doing to Balochis in their own country. "Everything is out in the open. People do keep a watch on the activities of Pakistan through social media," he said, seeking global support for the liberation of Balochistan and its people.

Switzerland: Posters and banners highlighting human rights violations in Balochistan and Khyber Pakhtunkhwa installed in front of the United Nations in Geneva where 42nd session of UN Human Rights Council is underway. pic.twitter.com/lMrARZfJsT

Referring to his speech at the UN Human Rights Council or UNHRC session, Peter Tatchell, a UK-based Human Rights activist, told news agency ANI that "All pieces of evidence from human rights defenders inside Pakistan and international human rights organisations, including Amnesty and other human rights watchdog, show repeated stories of brutality, abductions, disappearances, torture and extrajudicial killings carried out by the Pakistani state and military agencies."

"This is in clear violations of Pakistan's own constitutional as well as international human rights law," Mr Tatchell pointed out.

When asked about the standpoint of the international community that Pakistan exports terror across South Asia, the activist highlighted how Islamabad faces charges of funding, aiding and colluding with terrorists within its own state and exporting terror abroad.

"Until it ceases its human rights violations and its collusion with terrorism by cracking down on fundamentalists and extremists, the international community should institute economic sanctions and break diplomatic relations with Pakistan," he stressed.

He added, "There is no way that Pakistan should be receiving military aid from countries like Britain and the United States. That aid has to stop because it is complicit in human rights abuses" against its own people, especially minorities.

Speaking about Pakistan on similar lines, Razzak Baloch, Organiser of the US-based Baloch Rights Council, told news agency ANI, "This is what you call heights of hypocrisy." Pakistan wants to hide the gross human rights violations they are doing in Balochistan by diverting the world's attention, he said.

Ironically, while Pakistan's Foreign Minister Shah Mahmood Qureshi was addressing the UN Human Rights Council session in Geneva on Tuesday, protests took place right outside the UN Headquarters against the dire situation of Human Rights in Pakistan and Balochistan.

Pakistan, on Tuesday, was left red-faced when Islamabad's desperate attempt to divert attention with its "fabricated narrative" on Kashmir fell flat with countries like Russia, United States, UAE all siding with India.

While Pakistan has been running from pillar to post, New Delhi has made it very clear that Kashmir is a strictly internal matter for India.