Priyanka Chopra revealed that in her career of 22 years, she received equal pay as her male co-actor for the first time this year. 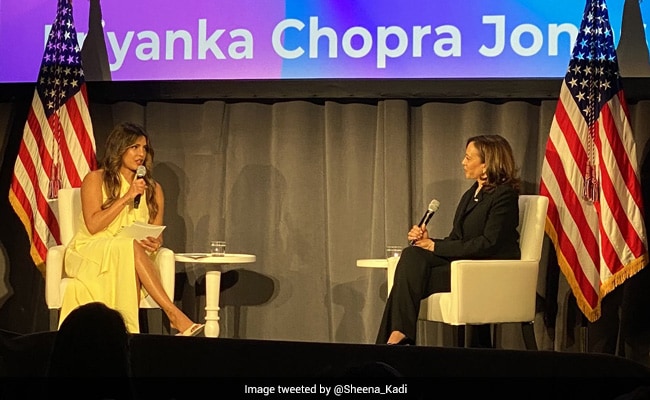 Priyanka Chopra started the session with a jab at men patronising women.

Priyanka Chopra on Friday visited the White House and interacted with US Vice President Kamala Harris at the Democratic National Committee's Women's Leadership Forum. In the images surfacing online, Priyanka Chopra was seen seated on the stage wearing a yellow outfit and asking Kamala Harris some important questions about various topics.

The two discussed issues such as abortion laws, pay parity and gun reform in the United States. According to Reuters, the 40-year-old star started the session with a jab at men patronising women. She pointed to the silence in the room and jokingly said, "Do you hear that sound? That is the sound of no mansplaining, ladies."

Take a look at the images and videos from the event below:

During her interaction with the US Vice President, Ms Chopra also revealed that in her career of 22 years, she received equal pay as her male co-actor for the first time this year

Kamala Harris, on the other hand, reminded top female democrats of their duty to fight for reproductive rights and how electing two more Democratic senators in the upcoming midterm elections is critical to that fight.

"If there were ever any reason for this group to exist in recent memory, the moment is now," Ms Harris said. "We have got to do everything we can in the next 39 days to remind people what is at stake in these elections," she added.

Meanwhile, Priyanka Chopra also posted pictures from her visit to the White House on social media. Taking to Instagram stories, the actor shared images of the Washington Monument, a glimpse inside the White House and a beverage she had, which had the presidential seal on it.

On the work front, Priyanka Chopra was last seen in Matrix 4. Next, she will be seen in Russo Brothers' Citadel and It's All Coming Back To Me, co-starring Sam Heughan and others.