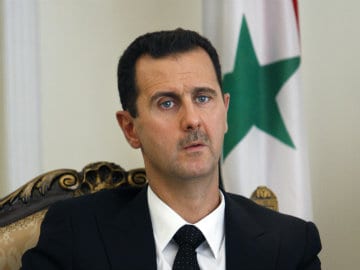 Beirut: Syria's army declared a victory against insurgents last week when it pushed back their advance towards pro-government towns in the west of the country. But a month earlier the strategic area did not even appear at risk.

The campaign near Hama against al Qaeda-linked fighters and other groups shows how the Syrian military can quickly redeploy its forces to push back enemies using its superior fire power. But it also shows how the army is spread thinly in Syria, leaving at risk even areas of vital importance to the government.

The fighting near Hama, 200 km (125 miles) north of Damascus, is not over: rebels on Wednesday took back two villages captured by the government a day earlier, the Syrian Observatory for Human Rights, which tracks the war, reported.

Western officials believe the Syrian army, already stretched, has been under growing strain since Islamic State staged lightening advances in Syria and Iraq in June: insurgents this week briefly pushed into an area of Damascus that had not seen fighting for 18 months, the Observatory reported.

Shi'ite Iraqi militiamen who had been fighting alongside President Bashar al-Assad's forces have been recalled to Iraq to fight Islamic State, while the group has also opened new fronts against government forces in Syria.

Defeats, including the capture of an air base where Islamic State executed scores of Syrian soldiers, have stirred rare public dissent in loyalist circles about the government's tactics - a potential pressure point for the Syrian leader.

But more than three years into the conflict, Mr Assad's allies warn against underestimating the strength of pro-government forces and their ability to endure with the help of powerful friends, notably the Iranian-backed Lebanese group Hezbollah.

"The Syrian army can fight for the coming 10 years," a Lebanese politician allied to the Syrian government and with detailed knowledge of the conflict in Syria said.

As Washington draws up plans to train more than 5,000 Syrian rebels as part of its strategy to fight Islamic State, military experts say the Syrian army looks set to remain the strongest player in a war that has killed more than 191,000 people.

That means the debate over whether Western states should engage Damascus in the fight against Islamic State is unlikely to die down any time soon. Western governments, seeing Mr Assad as part of the problem, have ruled out the idea.

GUARDING AGAINST A COUP

The armed forces numbered around 300,000 personnel before the conflict and have shrunk by 30-50 percent through desertions, defections and deaths, according to estimates from analysts, diplomats and security officials.

"It still remains the most powerful force in Syria in relative terms," said Emile Hokayem, a senior fellow at the International Institute for Strategic Studies (IISS).

A lack of manpower means pro-government forces have had to concentrate their efforts, focusing on a strategic corridor of territory stretching north from Damascus to the Mediterranean.

They have left parts of the north and eastern Syria to insurgents including Islamic State, Western-backed rebels, al Qaeda's Syria branch and other Islamist brigades.

To defend key areas, the military has adapted, relying on units seen as the most loyal to Assad as well as mobilising powerful Syrian militias to fight alongside regular army forces.

"The regime never used 100 percent of its manpower. It deployed units that were either predominantly Alawite or under Alawite commanders," said Syria expert Isabel Nassief from the Institute for the Study of War in Washington, referring to the Assad family's sect, an offshoot of Shi'ite Islam.

This helped to prevent coups by the army, which drew conscripts from some of the Sunni Muslim communities that turned against Assad. While top members of the army defected at the start of the conflict, they did not take whole units with them.

"Given the very difficult situation of a civil war, it is remarkable that it is still standing," said Florence Gaub, senior analyst at the European Union's Institute for Security Studies.

The military's core has become a mix of highly politicised units that traditionally protect the president, units with heavy artillery and the air force, she said.

"You can imagine the military a bit like a car. You are losing things that are not crucial, like windows and seatbelts, and maybe the whole boot goes, but the car is still driving."

Mr Assad has also become increasingly dependent on the National Defence Force, a grouping of loyalist Syrian militias under the umbrella of the army.

Set up in late 2012, it is believed to number tens of thousands of fighters seen by Damascus as more reliable than sections of the regular army. The NDF, along with other local and foreign militia, has proven crucial to Assad's survival.

"If it was just his army doing all the fighting and control of the land, Mr Assad would have been gone already. It is all about these militias at this point," IISS's Hokayem said.

Thousands of Hezbollah fighters and a flow of arms from Russia have proven crucial in helping the pro-Assad side hold ground and recapture some areas.

"The Syrian Arab Army has lost power in a classical sense but it has made gains in guerrilla warfare through the formation of smaller groups which have a greater capacity to confront the opposition groups and the way they fight," said Salem Zahran, a Lebanese journalist with close ties to Damascus.

STRETCHED AND UNDER PRESSURE

But the army is no longer capable of the kind of large-scale ground operations and like most of the rebel groups, it is seen as unable to win large areas of territory quickly.

"They are stretched and they have been stretched since at least 2012. They are engaged on many fronts, the complexity and size and the type of operations have changed compared to 2012," a Western official who follows developments in Syria said.

"In 2011 and 2012 a whole unit could be dispatched into somewhere like Homs, they would carry out complex operations. If you look at what they are doing there now, the numbers are down," the official added.

Loyalist critics of the government's military strategy include Douraid al-Assad, one of the president's cousins. He called for the resignation of the defence minister following the mass execution of Syrian soldiers by Islamic State militants at Tabqa air base, some 400 km (250 miles) northeast of Damascus.

As insurgent groups including the Nusra Front, al Qaeda's official affiliate in the war, advanced in Hama province last month, he issued a plea on his Facebook page for Assad to send a force of up to 15,000 troops to prevent a massacre.

In another move with symbolic impact, he changed one of the main photos on his Facebook account to an image of Islamic State executions of the soldiers captured at Tabqa. The image he replaced was a family photo of the Assads gathered around the late president, Hafez al-Assad.

Some Western officials believe setbacks suffered by the Syrian army could eventually nudge the government towards the kind of political compromise that both Assad's friends and enemies say is needed to settle the civil war.

Although the army is still the strongest, it is under strain and unable to win back control of the rest of the country soon.

Promoted
Listen to the latest songs, only on JioSaavn.com
"It is very clear that they cannot withstand this situation forever because it will have an effect on the people in the core," said Gaub from the Institute for Security Studies.

"They are definitely overstretched, but on the other hand the rebels are not really matching what they have. It is really like two very sick people fighting."
© Thomson Reuters 2014
Comments
Syria war