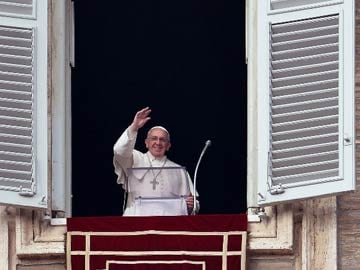 Pope Francis kisses the Book of the Gospels as he leads a mass at St Peter's Basilica on January 1, 2014 at the Vatican.

Vatican City: Pope Francis on Wednesday called for greater solidarity in the world in his first New Year blessing as pontiff in front of crowds of pilgrims on St Peter's Square.

"We all have a responsibility to act so that the world may be a community of brothers who respect each other, who accept their diversity and who take care of one another," the pope said on Catholic World Peace Day.

The first pope from Latin America said violence and injustice "cannot leave us indifferent or immobile" and said 2014 should bring "a real commitment to build a society with more justice and more solidarity".

Francis said he hoped that greater "fraternity" and a "cry for peace" from war-torn parts of the world would encourage more dialogue and "tear down walls that prevent enemies from seeing each other as brothers".

At a New Year mass in St Peter's Basilica earlier on Wednesday, Francis prayed in his homily for people "who hunger and thirst for justice and peace" in the world.

He also called on the faithful to show "strength, courage and hope" in the year to come, speaking in his homily in front of thousands of people in the church.

Francis was elected in March 2013 following his predecessor Benedict XVI's momentous resignation - a first for the Catholic Church since the Middle Ages.

Promoted
Listen to the latest songs, only on JioSaavn.com
His down-to-earth style and commitment to reforming the Vatican have raised hopes in the Roman Catholic Church following a years of turmoil due to shocking child sex abuse scandals and growing secularisation in the West.

The 77-year-old Francis has called for the Church to reach out more to the vulnerable and has said it should be a "poor Church for the poor" that is less "Vatican-centric" and gives more power to local bishops.