On March 2, a 39-year-old man in northeast Austin was killed after a package on his front porch exploded, police said. 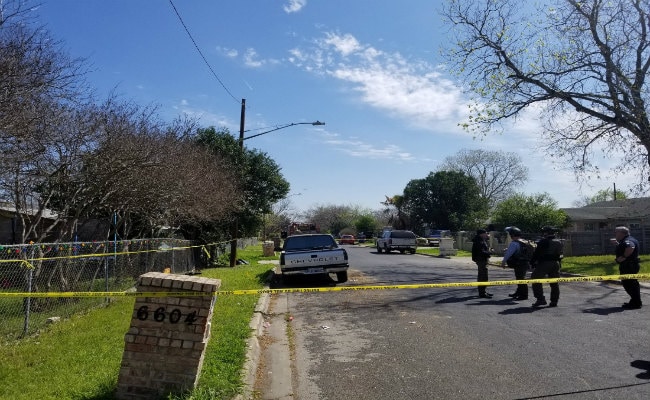 Police said Monday that the three exploding packages that detonated at homes in this city across a 10-day period - including two blasts on Monday - are all connected, although precisely what motivated the attacks remained an unnerving mystery.

The explosions across residential parts of the Texas capital killed two people, seriously injured two others and set residents on edge, even as the city continued hosting South by Southwest, a music, film and technology conference that draws tens of thousands of visitors each year.

Police urged residents to call 911 rather than open unexpected packages, while local and federal authorities scrambled to respond to the blasts, at one point Monday hurrying from one explosion to another across town.

Authorities say they are exploring whether the explosions could be related to racial hatred, noting that both of the people killed - an adult man and a teenager - were black, while an elderly Hispanic woman was seriously injured.

"These incidents are related," Austin Police Chief Brian Manley said at a briefing. But as for what might have prompted the string of explosions, he said: "We are not ruling anything out at this point."

The first explosion occurred March 2, when a package on the front porch of a northeast Austin home exploded, killing 39-year-old Anthony Stephan House.

"It sounded like a cannon," Kenneth Thompson, who lives across the street from House, said of the explosion.

At the time, police said House's death was "suspicious" but believed it was an isolated incident with no continuing threat to the community.

Ten days later, that changed when a pair of packages detonated at homes several miles apart Monday over a matter of hours.

Investigators were still responding to the first explosion Monday morning - which killed a 17-year-old male and seriously injured an adult woman - when a second blast detonated at a house farther south, sending a 75-year-old Hispanic woman to the hospital with life-threatening injuries.

Reached by phone Monday, LaVonne Mason, co-founder of the Austin Area Urban League, said her grandson was the 17-year-old victim killed Monday morning, but she declined to say anything further. Her husband, Norman Mason, is a well-known dentist in the East Austin area and a longtime mentor to black student athletes at the University of Texas.

Relatives on the scene identified the woman injured in the third blast as Esperanza Herrera. They also said her mother, Maria Moreno, suffered minor injuries. Manley said that just as in the other bombings, the injured woman came outside her home, found a package and picked it up.

"The box detonated at that point," he said.

Manley said police did not know if the victims who were killed or injured were the specific targets of the packages. The police chief warned residents to avoid opening unexpected packages or other deliveries they were not expecting; he described the explosives as arriving in "box-type deliveries" but did not elaborate, citing the ongoing investigation.

"It's not time to panic, but it's time to be vigilant," he said.

Manley said that police could not rule out a hate crime as the cause of the bombing, though he warned that police had not yet identified any ideology or connection between the victims. The FBI was assisting with the investigation, and Michelle Lee, a spokeswoman for the bureau, said agents were "definitely not ruling out" a hate crime, due to the race of the first two victims.

"There's always concern about that," Nelson Linder, president of the NAACP of Austin, said of a potential hate crime, "but other than the two first victims' race, there's no evidence to say they were one at this time."

The Rev. Sylvester Chase, the pastor at Wesley United Methodist Church, said Anthony House, the first victim, was the stepson of Freddie Dixon, a former pastor there. While House was not a parishioner, Chase said he was rattled by the bombing.

"It's got us on alarm, everybody on alarm," he said. "We don't know what to think, because they haven't put out any type of information. It's just circumstantial, what it could be, what it might be."

Rianne Philips, who lives next door to House, said her husband was the first to find House after the fatal March 2 blast. Philips said that she was alarmed to hear about the latest bombing, but also relieved that the police were now focused on House's death as a homicide.

"They're not going to let this slide," Philips said. "It's really sad, but this means there's a lot of attention on this now."

Isaiah Guerrero, 15, said he was spending the first morning of his spring break making music on his computer when he heard the third explosion go off just before noon Monday.

The house shook, and so did his body, the teenager said. Guerrero then climbed up a tree and on top of his house. Within minutes, police and fire officials swarmed the scene, closing off streets. Guerrero, who lives behind the house where the bomb went off, said he couldn't see the damage to the front of the house.

He echoed law enforcement officials in warning the public to pay attention to things like packages, "especially if you didn't order something," he said. Guerrero added: "I expected my spring break to be peaceful, not harmful."

The Bureau of Alcohol, Tobacco, Firearms and Explosives said Monday it was dispatching members of its National Response Team (NRT) to help respond to the explosions. According to the agency, this group activates for "significant fire and explosion incidents," considered those that are either large in scale or particularly complicated due to the size or scope.

In the past, that has included responding to the West, Tex., plant fire in 2013; a string of church fires in Texas; and the bombings in Oklahoma City and at the 1996 Olympic Games in Atlanta. The NRT works with other investigators to reconstruct scenes and determine what caused the fires or explosions; in cases involving bombings, the team also searches for evidence to be used in any prosecution that may follow.

Texas Gov. Greg Abbott, R, said his office was offering a $15,000 reward for information leading to the arrest of the person or people responsible for the "atrocious attacks."

"I want to assure all Texans, and especially those in Austin, that local, state and federal law enforcement officials are working diligently to find those responsible for these heinous crimes," Abbott said in a statement.

Manley said local and federal law enforcement agencies would ensure "every stop would be pulled out" to solve the cases.

Promoted
Listen to the latest songs, only on JioSaavn.com
"We are not going to tolerate this in Austin," he said.