Washington Shooting: The video, capturing the first deadly Washington, D.C., police shooting since new bodycam rules and other reforms took effect in the District, was made public a day after 18-year-old Deon Kay, whom police described as a known street gang member, was killed. 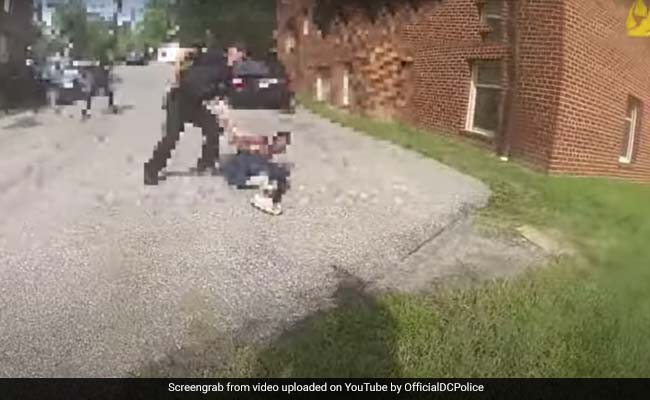 The video shows Kay running toward the officer carrying what appears to be a gun in one hand.

Body-worn camera footage released by District of Columbia police on Thursday shows a white officer fatally shoot a young Black man, then leave the suspect for others to attend as he searches for the gun that he says the suspect tossed away.

The video, capturing the first deadly Washington, D.C., police shooting since new bodycam rules and other reforms took effect in the District, was made public a day after 18-year-old Deon Kay, whom police described as a known street gang member, was killed.

Wednesday's shooting sparked protests, becoming another flashpoint in a summer of demonstrations over what activists decry as an epidemic of excessive lethal force by police against African-Americans.

Word spread through the Southeast neighborhood of the nation's capital that Kay was unarmed and running away when shot.

Releasing video on Thursday from the bodycam of the shooting officer, police said patrol officers had been looking for a man reported to be carrying a gun and recognized the suspect from earlier encounters as Kay.

When police approached a parked car with Kay inside, he and another suspect jumped out and fled on foot, with officers in pursuit, police Chief Peter Newsham told a news conference.

After chasing one suspect and being outrun, the officer in question told investigators, he turned around to see Kay coming toward him brandishing a pistol. The officer fired the single shot that killed the suspect and saw Kay fling his gun, Newsham said.

The video shows Kay running toward the officer carrying what appears to be a gun in one hand as police are heard shouting, "Don't move, Don't move."

At the crack of a gunshot, Kay crumples to the ground and cries out as another policeman points down a hill, leading the officer who fired to run off immediately in that direction.

Leaving other officers to tend to the dying suspect, the officer climbs down an embankment into a playground and grassy area, yelling, "Where is it? Where is it? ... I'm looking for the gun. ... He threw it." Minutes later the officer announces that he has found the weapon.

Newsham said the gun ultimately landed 98 feet (30 meters) from where Kay fell. He acknowledged to reporters, "That does seem like a long way to throw a weapon." No airborne object is discernible in the chaotic video.

Newsham said police rushed out the footage to counter "a lot of misinformation" that could otherwise "lead to disturbances in our city."

By Thursday, demonstrators gathered outside the home of Mayor Muriel Bowser calling for her to fire the chief.

"I'm a Black person living in this city, and I'm tired of seeing people like me get murdered," one woman, wearing a "Black Lives Matter" T-shirt, told WRC-TV, at the protest.

The city's new reform law says police, required since December 2016 to wear bodycams on patrol, are to make their video available to a victim's family within five days of a shooting.

Disclaimer: Content in this video could be disturbing for viewers.