He also said that there will be another session tomorrow, which is on digital transformation and later on, along with the other leaders, PM Modi will visit Mangroove forest. 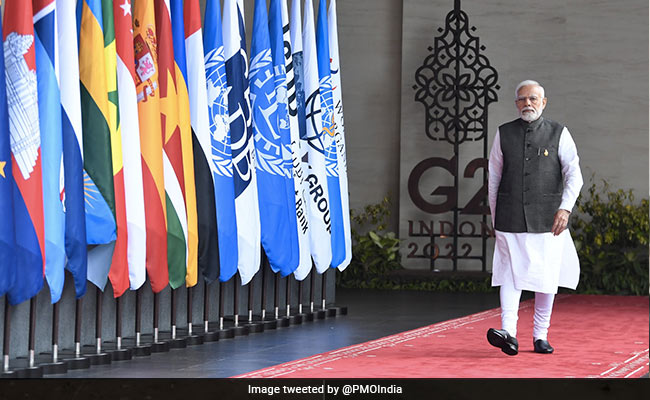 Prime minister Narendra Modi will participate in the G20 working session on "Health" today and will also address the Indian community at Bali, the Ministry of External Affairs said.

"PM has also met in his intervention in the session. He will now go for the leader's lunch, a little later. Later in the afternoon, we have session 2, which is on health. Thereafter, he will address the Indian community. And then on a welcoming dinner in the evening," MEA Spokesperson Arindam Bagchi said in a video shared on Twitter.

He also said that there will be another session tomorrow, which is on digital transformation and later on, along with the other leaders, PM Modi will visit Mangroove forest.

"A no. of bilaterals are being scheduled for tomorrow. Today, also he met some other leaders in the brimful sides," Bagchi added.

"An update on PM @narendramodi 's engagements from Apurva Kempinski in Bali, the #G20Indonesia Summit venue."

Earlier, today, PM Modi addressed the G20 working session on Food and Energy Security session and reiterated India's long-standing position in favour of dialogue and diplomacy in Ukraine and said "'We have to find a way to return to the path of the ceasefire" in Kyiv.

"I have repeatedly said that we have to find a way to return to the path of ceasefire and diplomacy in Ukraine," he added.

PM Modi, who arrived in Bali on Monday, said, "Over the past century, the Second World War wreaked havoc in the world. After that, the leaders of that time made a serious effort to take the path of peace. Now it's our turn. The onus of creating a new world order for the post-Covid period lies on our shoulders. The need of the hour is to show concrete and collective resolve to ensure peace, harmony and security in the world."

Referring to India as the "holy land of Buddha and Gandhi" PM Modi said that he is confident that the next year when G20 meets they will all agree to convey a strong message of peace to the world.

PM Modi started his speech by congratulating Indonesia for giving effective leadership to the G-20 in a challenging global environment. He further said that Climate change, the Covid pandemic, the developments in Ukraine, and the global problems associated with it have created havoc in the world.

"Global supply chains are in ruins. There is a crisis of essentials and essential goods all over the world. The challenge for the poor citizens of every country is more severe. Everyday life was already a struggle for them. They do not have the financial capacity to deal with the double whammy. Due to the double whammy, they lack the financial capacity to handle it. We should also not hesitate to acknowledge that multilateral institutions such as the UN have been unsuccessful on these issues. And we have all failed to make suitable reforms to them. Therefore, today the world has greater expectations from the G-20, and the relevance of our group has become more significant," PM Modi added.

Talking about the problems during the pandemic situation, PM said that India had ensured the food security of its 1.3 billion citizens. At the same time, food grains were also supplied to many countries in need. The current shortage of fertilizers in terms of food security is also a huge crisis.

He further said that the fertilizer shortage "is tomorrow's food crisis," and the world will not have a solution.

PM Modi said that all the G20 countries have to build mutual agreement to maintain the supply chain of both manure and food grains stable and assured.

"In India, for sustainable food security, we are promoting natural farming and re-popularising nutritious and traditional foodgrains like millets. Millets can also solve global malnutrition and hunger. We all must celebrate the International Year of Millets with great enthusiasm next year," he added.