"Girl! Girl!" a man aboard the boat yelled in Spanish, celebrating the dramatic results of the elaborate gender-reveal stunt for a new baby in the family. "It's a girl!" 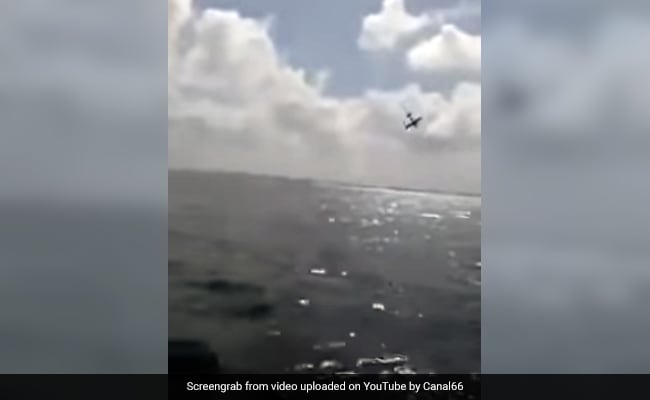 Both the pilot and the co-pilot were killed in the crash, authorities later confirmed to local media.

The small plane arced over a blue lagoon near the Caribbean Sea, flying low above a family in a boat on Tuesday afternoon. As they clapped, it released a pink cloud into the sky.

"Girl! Girl!" a man aboard the boat yelled in Spanish, celebrating the dramatic results of the elaborate gender-reveal stunt for a new baby in the family. "It's a girl!"

Seconds later, the family's video shows, the small aircraft plummeted into the Nichupte; Lagoon, a body of water off the east coast of Cancun, as the family and their guests watched in disbelief.

"No way!" a man cried in Spanish with an obscenity. "It went into the water."

Both the pilot and the co-pilot were killed in the crash, authorities later confirmed to local media. An investigation into the cause of the fatal crash is underway, and authorities have yet to release the names of the victims.

The crash is the latest incident of a gender-reveal celebration that turned fatal. In recent years, a practice that became popular following a 2008 parenting blog post, has sparked multiple wildfires, led several deaths in explosions, and caused at least one other plane crash.

It's not clear who hired the plane in Cancun this week for the latest tragic announcement.

The 30-second cellphone video captured by someone on the boat shows the small white plane soaring near Isla Dorada, a waterfront community in the heart of Cancun's tourist zone. Near the beginning of the clip, one man unknowingly predicted the disaster that would take place moments later.

"As long as it does not fall on us," the man jokes, referencing the aircraft.

"Is it a boy?" another man can be heard saying.

The camera follows the plane through the clear sky as the pilot eventually releases the pink cloud.

Then, the videographer loses sight of the plane for a few seconds as the group on the boat cheers.

By the time the plane is back on camera seconds later, it swiftly nose-dives straight into the lagoon as the crowd shouts in horror.

Local authorities including the National Guard and the Municipal Police arrived at the scene around 4 p.m. on Tuesday to lead the rescue mission to the downed aircraft, which was about 300 meters from the shore, Quequi reported.

The Municipal Police later confirmed two men, the pilot and co-pilot died in the crash. According to authorities, the pilot of the white Cessna appears to be the owner of the aircraft, Quequi reported.

Milenio and El Universal reported the aircraft, which departed from Holbox Island at 3:31 p.m., belonged to Xomex, an aviation company that offers commercial, recreational and cargo flights in the Riviera Maya and the country's southeast area, according to their website.

A representative with Xomex did not immediately respond to a message from The Washington Post late on Wednesday.

The Federal Civil Aviation Agency has begun an investigation to determine the cause of the crash, according to Milenio.

Pictures shared on social media show workers dressed in white hazmat suits accompanied by local authorities rolling at least one body wrapped in a blanket from the dock.