"I will eat your liver if you want me to. Give me salt and vinegar and I will eat it in front of you," Duterte said in a speech. 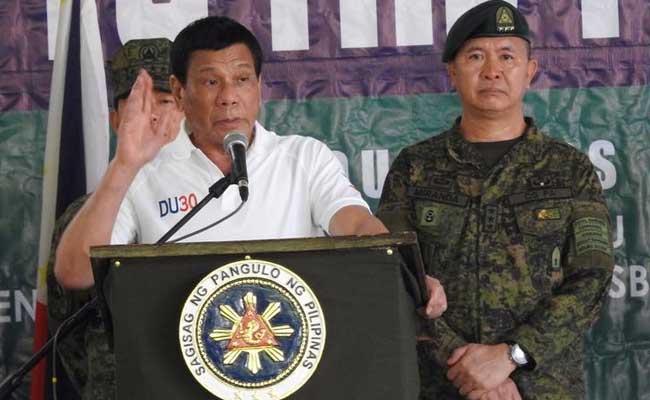 Manila: Philippine President Rodrigo Duterte has threatened to eat alive the terrorists behind the abduction and beheadings of two Vietnamese sailors in a furious reaction to the killings.

The remains of the two hostages, who were kidnapped along with four other crew members of a Vietnamese cargo ship in November last year, were recovered off the southern region of Mindanao by Philippine troops on Wednesday.

The military blamed the killings on the notorious kidnap-for-ransom Abu Sayyaf group with a stronghold in the area, and which is known to behead its hostages unless ransom payments are made.

"I will eat your liver if you want me to. Give me salt and vinegar and I will eat it in front of you," Duterte said in a speech before local officials late Wednesday.

"I eat everything. I am not picky. I eat even what cannot be swallowed."

Holding up a mobile phone with a photo of the slain Vietnamese sailors, Duterte angrily cursed the militants.

"Will we allow ourselves to be enslaved by these people? Son of a whore."

Duterte, 72, ordered a military offensive against the Abu Sayyaf and other terrorsts in the southern Philippines last year.

Abu Sayyaf, originally a loose network of terrorists formed in the 1990s with seed money from Osama bin Laden's Al-Qaeda network, has splintered into factions, with some continuing to engage in banditry and kidnappings.

One faction has pledged allegiance to ISIS, and joined militants battling security forces since late May in Marawi, the largely Catholic nation's most important Islamic city.

The terrorists continue to occupy parts of the southern city despite a US-backed military offensive there that has claimed more than 460 lives and displaced nearly 400,000 people.

Last year, the leader said he would eat Abu Sayyaf militants alive in a bloodthirsty vow of revenge following a bombing in Davao, his southern home city that claimed 15 lives.

Duterte said Vietnam had raised concern about a series of high-seas kidnappings blamed on the Abu Sayyaf when he visited Hanoi last year.

On Wednesday, Vietnam's foreign ministry condemned the killing of the two sailors as it called for heavy punishment.

One of the six crewmen was rescued last month and three remain in captivity according to the Philippine military.