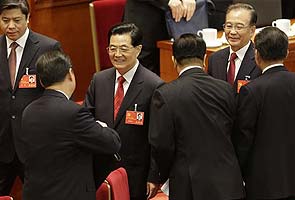 Beijing: Preparing to hand over power after a decade in office, China's President Hu Jintao called on Thursday for sterner measures to combat official corruption that has stoked public anger while urging the Communist Party to maintain firm political control.

In a 90-minute speech opening a weeklong party congress to usher in new leaders for the coming decade, Hu cited many of the challenges China faces - a rich-poor gap, environmentally ruinous growth and the imbalanced development between prosperous cities and a struggling countryside.

Yet he offered little evidence of fresh thinking to address ways to reinvigorate a flagging economy and meet public demands for a more open government. Instead he outlined more of the piecemeal policy-making that has been the hallmark of his 10 years in power.

Only in addressing the rampant graft did he sound the alarm. Hu singled out party members, calling on them to be ethical and to rein in their family members, whose trading on their connections for money and lavish displays of wealth have deepened public cynicism about the party.

"Nobody is above the law," Hu said to the applause of the 2,309 delegates and invited guests gathered in the Great Hall of the People, with his successor, Vice President Xi Jinping, and other party notables on the dais behind him. (Xi Jinping: The man who's likely to lead China)

He later said, "If we fail to handle this issue well, it could prove fatal to the party, and even cause the collapse of the party and the fall of the state."

The tough appeal on corruption follows months of scandal that have further battered the party's image in the public eye and made the power transfer more divisive. A senior politician, Bo Xilai, was purged for involvement in covering up his wife's murder of a British businessman, but only after rumors, trials and media reports that portrayed party leaders as more interested in power than in governing.

The congress, held once every five years, initiates a carefully choreographed but still fraught political transition in which Hu and most of the senior leadership in the 60s begin to relinquish office to Xi and his 50-something colleagues over the next five months.

Scandal aside, the transition always invites tough bargaining, as exiting leaders and still-powerful retired party elders try to place prot&#233;g&#233;s and allies in the leadership.
Stakes have seemed higher still this year for the party and the public, with China seemingly facing a turning point. The old model of heavily state-directed growth that lifted hundreds of millions out of poverty and made China an economic powerhouse is faltering in the face of rising domestic debt and a weak global economy. Meanwhile, the government has to contend with the public's continued expectations of higher living standards and for less corruption and greater accountability, if not outright democracy.

In a sign of the public disquiet, four ethnic Tibetans in Sichuan and Qinghai provinces set themselves on fire on the eve of the congress in protests against Chinese rule of Tibetan areas, London-based rights group Free Tibet said, adding that it was the most such self-immolations in a single day. (As China preps for new leader, 4 Tibetans self-immolate)

At dawn in Tiananmen Square, next to the congress venue, a woman in her 30s threw pieces of torn paper into the air and shouted "bandits and robbers!" - a curse often leveled at corrupt local officials. She was taken away by the security forces which have smothered all of Beijing for the congress.

Taxi drivers have even been told to remove window handles to block any drive-by sloganeering.

The congress itself often seems from a different era. Most of the delegates are drawn from the ranks of the 82 million-member party to make the event appear broadly representative while the real deal-making is done by a few dozen power-brokers behind the scenes.

After the delegates stood for the national anthem, the congress paused for a moment of silence to remember Mao Zedong and other revolutionary leaders. A golden hammer and sickle, the party's symbol, hung on the wall behind Hu. On the rostrum, dressed in a Mao jacket, sat 95-year-old Song Ping, a veteran revolutionary and party insider.

Coming so soon after President Barack Obama's re-election in the United States, the congress has drawn unfavorable comparisons from politically minded Chinese who have bemoaned how little direct influence they have in choosing their leaders.

"I am doing nothing but staring at the television before Obama gets re-elected. As for China's party congress, there is no need for me to worry. On the contrary, it would be a waste of my time," Xu Xiaoping, a celebrity entrepreneur who co-founded a successful chain of English language cram schools, said on a Chinese version of Twitter where he has 6 million followers.

Hu set a target for doubling the size of the country's economy and per capita income from 2010 to 2020, implying an 8 percent annual growth rate that economists say may saddle China with higher debt and more waste and prevent a rebalancing away from state companies to private companies and households.

Hu also turned aside calls from retired party members and government think tanks to answer public demands for more transparency and accountability by moving toward a more democratic system. He said the party must remain in charge while learning to be more responsive to public needs.

Promoted
Listen to the latest songs, only on JioSaavn.com
"We must ensure the unity of the leadership of the party," Hu said. He later added: "We will never copy a Western political system."