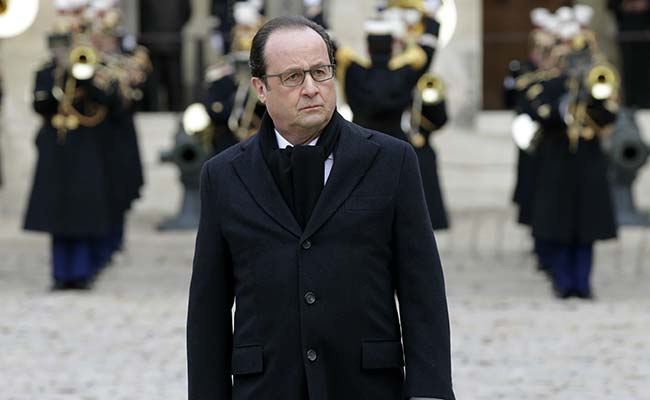 French President Francois Hollande arrives to lead the solemn ceremony on November 27, 2015 at the Hotel des Invalides, for the National Tribute to the November 13 Paris attacks. (AFP)

Paris: President Francois Hollande vowed today that France would respond to the "army of fanatics" which carried out the Paris attacks with more songs, concerts and shows, as the nation paused to pay homage to the victims.

"We will not give in either to fear or to hate," said Hollande on a cold and misty day in the courtyard of the historic Invalides, the 17th-century complex housing Napoleon's tomb.

"To all of you, I solemnly promise that France will do everything to destroy the army of fanatics that committed these crimes," he said before a crowd of 2,600 dignitaries and some of those injured in the violence.

Some sat in wheelchairs, while firefighters and ambulance personnel in uniform stood silently in rows, two weeks to the day since gunmen opened fire on bars, restaurants and a concert hall and detonated suicide vests at the Stade de France national stadium.

Pictures of the victims were displayed on a giant screen, the photographs striking for the fact that few were of people under 40.

The attacks -- claimed by the ISIS -- were the worst ever terror attack on French soil, leaving 130 dead and 350 injured, most under 35.

Hollande said "130 destinies had been stolen, 130 laughs that will never be heard again," adding that they had come from more than 50 places in France and 17 countries.

The attackers acted "in the name of an insane cause and a betrayed God," said Hollande.

He said France would respond to the attacks defiantly, with more "songs, concerts and shows. We will continue to go to stadiums."

However, a handful of the victims' families boycotted today's ceremony, saying the government failed to take sufficient measures to protect the nation in the wake of the terrorist shootings at Charlie Hebdo satirical newspaper and a Jewish supermarket in Paris in January.

"Thanks Mr President, politicians, but we don't want your handshake or your tribute, and we hold you partly responsible for what has happened!" Emmanuelle Prevost, whose brother was one of the 90 slaughtered at the Bataclan concert hall on November 13, wrote on Facebook.

Reflecting the solemnity of the ceremony, Liberation and Le Parisien newspapers listed all the victims on their front pages today in stark black and white print.

Having vowed to crush ISIS for their role in the attacks, Hollande has spent the week in a whirlwind diplomatic bid to build a broad military coalition, although his efforts have met with limited success.

He said Thursday that he and President Vladimir Putin had agreed to coordinate air strikes against ISIS.

"The strikes against Daesh (ISIS) will be intensified and be the object of coordination," Hollande said, adding that the military action would focus on the transportation of oil, one source of ISIS's funding.

Putin said the Syrian army was a "natural partner in the fight against terrorism", while Hollande reiterated the view that Assad "has no place in the future of Syria."

On Friday, French Foreign Minister Laurent Fabius said he could envisage Syrian government troops taking part in the anti-ISIS fight, though he later clarified to AFP that this could only happen after a change of regime.

Hollande's drive has secured some offers of support from France's allies but the United States remains sceptical about increased military action in the absence of capable local forces on the ground and a clear political strategy.

Nor will the US work with Russia while it is bombing other rebel groups that oppose Assad.

The effort has also been complicated by Turkey's downing of a Russian warplane on the Syrian border on Tuesday.

The French leader has the support of Britain, whose Prime Minister David Cameron set out his case on Thursday for air strikes against ISIS in Syria, telling British lawmakers that the country could not "sub-contract" its security to allies. But Cameron still requires parliament's approval.

Hollande has also been backed by Germany, which has offered Tornado reconnaissance jets, a naval frigate, satellite images and aerial refuelling to help in the fight against ISIS.

Germany is also promising to send 650 soldiers to Mali to provide some relief to French forces fighting terrorists there.

As France mourns its dead, an international manhunt is still on for two key suspects in the attacks -- Salah Abdeslam, who played a key logistical role in the wave of terror, and Mohamed Abrini, seen with Abdeslam two days before the November 13 atrocities.