"Oh, I've got a worm in my eye!" Ben Taylor recalled thinking 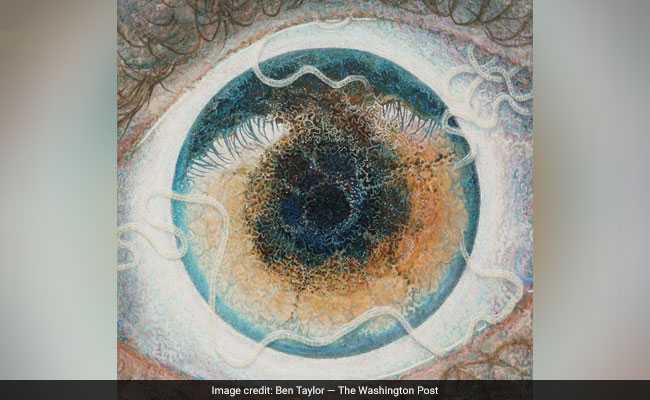 The painting was not an image of anything in particular, just an abstract confluence of psychedelic colors and wormlike patterns inside a perfectly round circle. Ben Taylor didn't like it much, and he said he didn't know why he painted it. But the wormlike patterns represent years of spiraling into unknown illness that had driven the 47-year-old painter and musician to depression, sometimes even thoughts of suicide.

Taylor gave up on the painting and in 2014 shelved the unfinished work he had simply called "Untitled."

He had been experiencing a litany of symptoms his doctors couldn't explain: lumps that kept appearing and disappearing, blinding pain in his eyes that lasted for a day and came back another, a small muscle in his forehead that he felt "snap." His white blood cells soared, and itchy rashes covered parts of his body. His joints ached. He was constantly hungry and he had been eating a lot, but he couldn't gain weight. There was a sinking feeling that his body had become host to unwelcome visitors, but tests showed nothing.

One morning, he noticed a faint yellowish lump protruding from underneath his left cornea. And then he felt his eye vibrate, as if something was slithering from within. He rushed to a mirror to find that the lump had disappeared, replaced by a thin line that was also protruding. He touched it, and it moved.

"Oh, I've got a worm in my eye!" Taylor recalled thinking.

At a hospital near his home in Dartmoor in southwestern England, a doctor scalped a tiny part of his eye's outer layer and pulled out the wriggling parasite while Taylor kept his head still. And there it was, an inch-long roundworm called Loa loa. The doctor placed it in a container and Taylor watched it die.

That year, 2015, Taylor was diagnosed with Loiasis, commonly known as African eye worm, a condition caused by the parasite Loa loa. He contracted it after spending several days in the jungles of Gabon, a Central African country where infections caused by Loa loa had persisted for years. Taylor, a frequent world traveler who had spent parts of his childhood in Nigeria, Kenya and India, traveled to Gabon in the summer of 2013 after developing an interest in the country's spiritual traditions.

"I suppose there was almost a sense of relief . . . just because I realized I wasn't going mad," Taylor said of his diagnosis.

Taylor was hospitalized for a week. Doctors found two other types of parasites, hookworm and a roundworm called Strongyloides, which he likely contracted during his travels and which had gone undetected for years.

Loa loa is typically passed on to a host body through bites from insects, in this case, from deer flies, according to the Centers for Disease Control and Prevention. When a deer fly breaks human skin to eat blood, the larva enters the wound and begins moving through the person's body, where it grows into an adult worm. Deer flies are attracted to wood smoke and open cuts on the skin. Taylor said he had spent a lot of time near a wood fire in Gabon. The parasites must have entered his body through an itchy cut he had on his leg, Taylor said. And they thrived for two years as he deteriorated.

Diagnosing Loiasis can be difficult. It can sometimes be identified only when the worm becomes visible, as in Taylor's case.

While recovering, Taylor began painting again, and while rummaging in his home studio, he came across "Untitled," the unfinished work he had shelved earlier. That day, he finally realized what it looked like, Taylor said. The perfectly round shape was the iris, and the dark, wormlike patterns converging in the darkened middle form the pupil.

He grabbed his paints and brush and began to finish it. He drew the lashes and the sclera, or the white part of the eye. He painted over the middle, so that the intricate wormlike patterns look like spiraling galaxies disappearing into the dark pupil. He added the worms -- long, white and nearly transparent images slithering from the eyelids. "Untitled" became "The Host."

"The Host" is on the August cover of Emerging Infectious Diseases, a journal published monthly by the Centers for Disease Control and Prevention.[/caption]

The painting is on this month's cover of Emerging Infectious Diseases, a monthly journal published by the Centers for Disease Control and Prevention. Byron Breedlove, the managing editor, contacted Taylor a few weeks ago after coming across his painting online while looking for an image that would fit the month's theme: parasites.

"You're sort of startled by this almost 3-D thread that runs around the eye. It's very arresting to look at," Breedlove said. "I realized this would make a very striking image for a cover art . . . You can't help but look at it . . . It's looking back at you."

Taylor is convinced that the parasites that inhabited his body did not only cause his health to fail; he said they also affected his mental health, even his creative process, eerily guiding what he created in his studio. Abstract, wormlike patterns were never his style, he said, but he began experimenting with them as his symptoms progressed -- before he found out he had worms.

"I definitely believe that the worms had a hand in that painting," he said, adding later: "When you kind of look into the nitty-gritty of how much of the human body actually contains your DNA versus the billions of different bacteria that live within us, you start realizing that you're an ecology of beings that live within us."

It is unclear whether there is scientific evidence for Taylor's suspicions, but parasites have been known to affect people's behavior and mental health.

For example, Naegleria fowleri, an amoeba species, burrows into its host's brain, at first causing changes in the victim's sense of taste and smell, eventually causing the person to be confused and even hallucinate.

The neurological parasite Toxoplasma gondii can radically change the behavior of its hosts, which are usually rats and cats but can also be humans. In 2016, researchers from the University of Chicago Medical Center found that people with frequent bouts of impulsive anger are "more than twice as likely" to have been exposed to T. gondii.

Taylor has fully recovered and has dubbed his former squatters "creative worms." Looking back, he "wonders who the artist is, really."

(Except for the headline, this story has not been edited by NDTV staff and is published from a syndicated feed.)
Comments
Ben TaylorThe Host