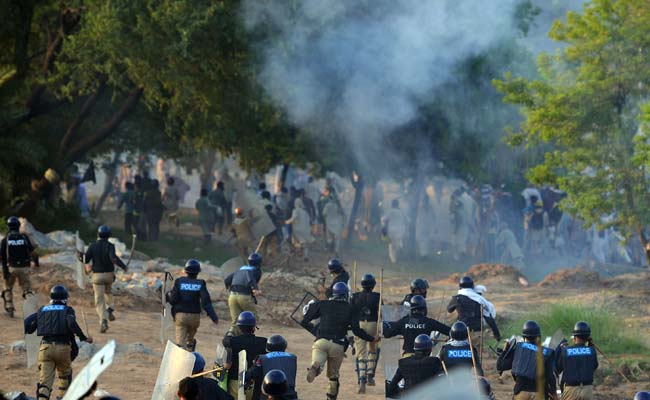 Islamabad: A political standoff on the streets of Pakistan's capital escalated into a national crisis Sunday after clashes between the police and protesters attempting to storm the prime minister's house left three people dead and at least 500 wounded, raising the specter of a government collapse.

The violence, in which the police fired rubber bullets and tear gas against protesters armed with sticks, provoked an intervention from the military, which has a long history of seizing power during times of chaos. On Sunday evening, the army chief held an emergency meeting with the military high command, moving it up by a day as the situation in the capital, Islamabad, deteriorated rapidly.

In a statement afterward, the military stressed its commitment to democracy and urged rival politicians to resolve their differences "without wasting any time." But it also stated that "further use of force will only aggravate the problem," an assertion that put further pressure on Prime Minister Nawaz Sharif by limiting his options to halt the chaos.

Thousands of protesters, led by the opposition politician Imran Khan and the cleric Tahir-ul-Qadri, have been camped out on the streets of Islamabad for more than two weeks in a bid to force Sharif to resign.

Sharif, who came to power in a landslide election victory just 15 months ago, has said those demands are "unacceptable" and "unconstitutional." But he has failed to find a negotiated end to the deadlock, which has paralyzed the capital and left his government badly weakened.

In a sign of the seriousness of the standoff, Sharif on Thursday requested that the army chief, Gen. Raheel Sharif, help defuse the tensions, and the two men, who are not related, agreed to push for negotiations to resume. But those talks collapsed over the weekend, and the protesters tried to leverage their position by seizing control of symbolically important ground.

On Saturday evening, Khan and Qadri ordered their protesters to push through police lines in the capital's "red zone" - a high-security area that includes the Parliament, the Supreme Court and many diplomatic missions.

Thousands of people stormed toward the prime minister's official residence. Others cut through a barbed-wire fence surrounding Parliament and rammed a truck through a metal fence. In clashes that lasted through the night, paramilitary and police officers fired tear gas and rubber bullets at the demonstrators, who stopped their advance only when army troops stationed inside the buildings issued a warning.

The defense minister, Khawaja Muhammad Asif, said the government had been compelled to use force to protect important buildings that symbolized the state.

One protester fell into a ditch and died of a heart attack, said Waseem Khawaja, a spokesman at the Pakistan Institute of Medical Sciences hospital. Two others admitted to the hospital died from their injuries.

On Sunday, protesters erected tents on the sweeping lawns in front of the main Parliament building; nearby roads were littered with debris, and skirmishes between protesters and security forces continued throughout the afternoon.

Khan made several speeches during the course of the day from atop a shipping container.

"I am a terrorist to you, Nawaz Sharif, because you feel terror," he said, in reference to criminal charges that the government has leveled against Khan. ('Nawaz Sharif Cannot Scare Us,' Says Imran Khan; Vows to Continue Protests in Pakistan)

Khan has said he started the demonstrations to protest what he says was vote-rigging in last year's election. But the chaotic scenes in Islamabad over the weekend led to worries that he might derail Pakistan's fragile democracy by creating the opportunity for a military intervention.

Those worries came even from his own ranks. In a news conference Sunday, Javed Hashmi, the president of Khan's Pakistan Tehreek-e-Insaf party, lashed out at Khan's decision to escalate the protest on Saturday night, and effectively announced that he was quitting the party.

Hashmi said Khan had overruled the senior party leaders who opposed his decision, and suggested that Khan had been influenced by a "signal" from outside, an apparent reference to military intervention.

"Imran Khan will be responsible if martial law is imposed in the country," Hashmi told reporters.

Later on Sunday, Khan said in a speech that he was "upset" by Hashmi's statements.

"From today our paths are separate," he said. (Rift in Imran Khan's Party Over March to PM's House, Four Expelled)

The prime minister reached Islamabad from Lahore on Sunday for talks with Cabinet ministers. A senior official in the government, speaking on the condition of anonymity because he was not authorized to speak publicly about its plans, said the government did not intend to arrest Khan or Qadri but was planning to "push them out of the red zone."

The military has seized power in Pakistan four times since 1958, usually at moments of upheaval in the political system. That history is particularly significant for Nawaz Sharif, whose last stint in power ended in 1999 with a military coup led by Gen. Pervez Musharraf.

This time, Sharif came to power with a sweeping mandate after his party's landslide win in May 2013, by promising to strengthen civilian supremacy. But this year he has clashed with the military on several key issues like peace talks with the Taliban and policy toward India.

Sharif also angered the military leadership by pursuing treason charges against Musharraf and preventing him from leaving the country. Sharif's supporters see the current turmoil as part of a military scheme to bring their leader to heel, if not to oust him entirely.

Some independent analysts agree with that view, while others see the upheaval as the product of a naked power grab by the two protest leaders.

"Things have taken the ugly turn Imran Khan and Qadri needed it to," said Mosharraf Zaidi, a political commentator based in Islamabad. "Those who can't win elections need upheaval to come into power."

By Sunday evening, Constitution Avenue, the main road linking Parliament to other major government buildings in central Islamabad, resembled a war zone. The police fired sporadic volleys of tear gas at groups of protesters, who in turn attacked them with bricks pulled from the sidewalk. Demonstrators set fire to trees and to a shipping container that blocked a road leading to an office housing several key ministries.

Amid the chaos, Qadri, an enigmatic cleric whose devoted following has provided the backbone of the demonstrations, delivered yet more speeches. Normally based in Canada, he has a small political party with no seats in Parliament.

Unlike Khan, who wants fresh elections, Qadri has called for a unity government to replace Nawaz Sharif's administration. Critics say that call suggests Qadri has ties to the military, which he denies.

After meeting with senior advisers, Nawaz Sharif called a joint session of the lower and upper houses of Parliament for Tuesday. (Nawaz Sharif Calls for Restarting Negotiations to End Crisis)

In a television interview Saturday, Asmatullah Junejo, a senior police official in Islamabad, apologized for "excessive force." But he underscored that Pakistani law did not allow for protests in front of the prime minister's official residence, and urged Qadri and Khan to exhibit restraint.

Promoted
Listen to the latest songs, only on JioSaavn.com
"The red lines will be secured," Junejo said.