Former Marine Paul Whelan was sentenced Monday to 16 years of hard labour on charges of espionage. 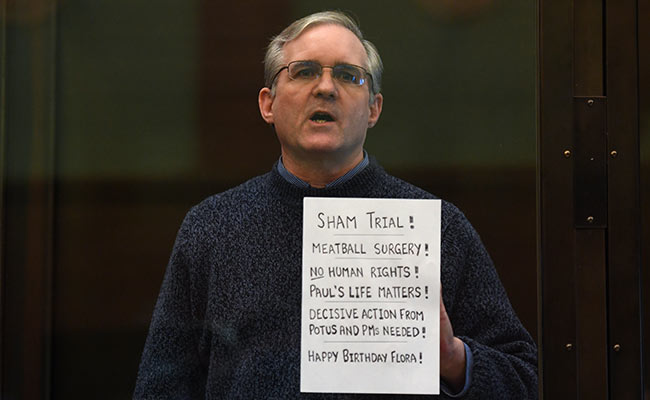 Paul Whelan's conviction is another impediment in US-Russia relations

The United States expressed outrage Monday over a Russian court's conviction of American Paul Whelan on espionage charges, saying he was deprived of a fair trial.

Whelan, a former Marine arrested in December 2018, was sentenced Monday to 16 years of hard labor after being found guilty of receiving classified information.

"The United States is outraged by the decision of a Russian court today to convict US citizen Paul Whelan after a secret trial, with secret evidence, and without appropriate allowances for defense witnesses," US Secretary of State Mike Pompeo said in a statement.

Just days earlier, Pompeo had publicly called on Russia to release Whelan, who contends that he was on holiday in Russia when he was given a USB drive thinking it contained family photographs.

"The treatment of Paul Whelan at the hands of Russian authorities has been appalling," Pompeo said.

Whelan's conviction is another impediment in relations between the two powers, which are at odds over Ukraine, Syria, Libya, arms control and a host of other issues.

President Donald Trump nonetheless recently said he hoped to invite his counterpart Vladimir Putin to the United States, welcoming him back into the elite club of the Group of Seven major industrial democracies, thereby ending Russia's suspension over its annexation of Crimea after seizing it from Ukraine.