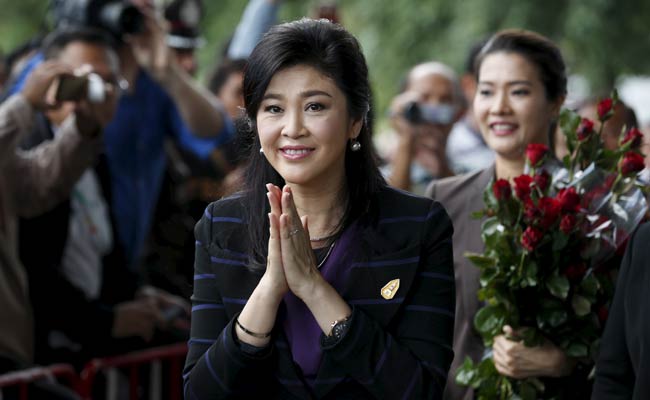 Thai PM is charged with criminal negligence over her management of the rice programme.(File Photo)

Yingluck, Thailand's first female prime minister, was removed from office by a court days before the military took power in a May 2014 coup.

The rice scheme, a flagship election policy that helped sweep her to office in a landslide in 2011, was a catalyst for months of crippling street protests in 2014 that led to the military takeover.

"We found that the rice policy could increase people's income and the price of rice for farmers," Yingluck told the Supreme Court north of the capital, Bangkok.

"It did not distort the market," she said. "We saw that the benefits of the scheme outweighed the monetary losses."

Yingluck has been charged with criminal negligence over her management of the rice programme, which was one of the populist policies engineered by her brother, former prime minister Thaksin Shinawatra. Thaksin was also toppled in a 2006 coup.

Thaksin is central to a conflict that has divided Thais for more than a decade. He lives in exile abroad to avoid a jail term for abuse of power charges he says were politically motivated.

The Shinawatras enjoy support in the mostly poorer north and northeast of Thailand while their opponents, including the royalist-military establishment that accuse the Shinawatras of corruption, mostly hail from Bangkok and the south.

Yingluck is accused of failing to stem losses from the multi-billion dollar subsidy scheme, which distorted global prices and saw Thailand lose its crown as the world's number one rice exporter to India.

On Monday, the military government said it would also lodge a civil damages case against Yingluck and some of her former ministers.

Yingluck has consistently denied any wrongdoing and has said the case against her is being rushed deliberately.

She told the court that she was in charge of formulating the policy, not the day-to-day running of the scheme.

Supporters earlier handed her flowers as she arrived at the trial, while others held framed pictures of Yingluck and her brother Thaksin.

Yingluck was banned from politics for five years in January 2015 after a military-appointed legislature found her guilty of mismanaging the rice scheme.

The scheme left Thailand with around 18 million tonnes of rice in stockpiles. The military government has sold more than 5 million tonnes in a series of auctions since taking power.
© Thomson Reuters 2016