Oradour, a massacre frozen in time 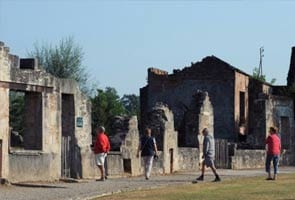 The main street at the martyr village of Oradour-sur-Glane in central France.

Paris: The French town of Oradour-sur-Glane, set to receive a German president for the first time, has become a ghostly war crimes museum since Nazi troops burned it to the ground on June 10, 1944.

It lies west of Limoges, central France, and was on the path of the SS Das Reich division as it moved north following the Allied D-Day invasion of Normandy four days earlier.

Why 642 men, women and children were massacred in Oradour has never been fully understood.

Possible explanations include the theft nearby of 600 kilos of gold from a German convoy, the kidnapping of a German officer, or simply an act aimed at terrorizing the region where resistance fighters were particularly active.

Only six people survived after at least 120 German troops, under the orders of Captain Otto Kahn, 26, and Lieutenant Heinz Barth, 23, rounded up Oradour's inhabitants .

The soldiers forced the men into barns, foundries and garages, and 245 women and 205 children into a church. They shot or gassed them, and set the bodies and the town ablaze.

Five men and one woman managed to escape and only 10 percent of the victims were eventually identified.

The only remains are crumbling stone walls, streets that are empty aside from spidery tram power lines, and rusting automobiles, an ensemble declared a national historic monument in 1945.

In January 1953, a French court tried 21 people for the crime, including 14 men from Alsace, a border region essentially annexed by Germany in 1940.

All but one of those had been conscripted into the German army and became known as the "Malgre Nous" (against our will).

Alsatian volunteer Georges Boos and German Karl Lenz were condemned to death, sentences later commuted to hard labour, while others were handed prison terms of between five and 12 years.

Barth initially escaped but was finally arrested in 1981 in East Germany. He was tried and sentenced to life in prison but was released in 1997 and died 10 years later.

In February 1953, French lawmakers voted an amnesty for the 13 other Alsatians, who returned home shortly after the trial.

Inhabitants of the region around Oradour were furious and the town handed back war honours bestowed by Charles de Gaulle in 1945.

Promoted
Listen to the latest songs, only on JioSaavn.com
French representatives were not invited to attend commemorative services for 20 years.