One Of Three Cuba Plane Crash Survivors Dies In Hospital

The 23-year-old was admitted to hospital with life-threatening injuries. 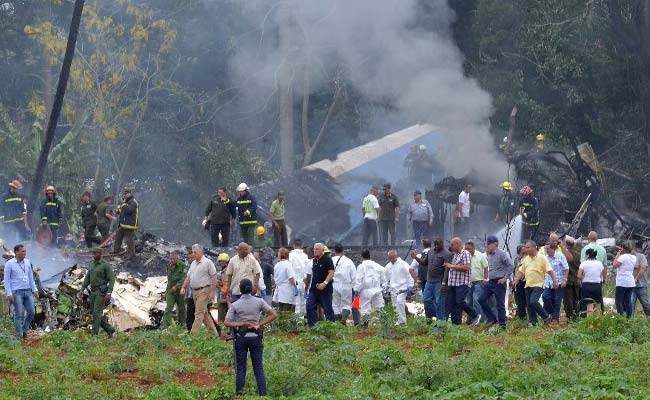 The other two survivors were still in critical condition

Havana, Cuba: One of the three women who survived Cuba's worst air crash in decades has died from her injuries, the health ministry said Monday, raising the toll to 111.

The 23-year-old, Gretell Landrove, was admitted to hospital with life-threatening injuries and she did not make medical progress, the ministry said in a statement read out on state television. The other two women survivors were still in critical condition.

Earlier, doctors had indicated that two of the Cuban survivors of Friday's crash were fighting for their lives at Havana's Calixto Garcia hospital.

A Boeing 737 leased to national carrier Cubana de Aviacion crashed shortly after taking off from Havana's Jose Marti airport on Friday with 113 passengers and crew aboard.

The Cuban government is investigating the cause of the crash and has so far identified 33 of the dead, some of whom have already been buried.

Transport Minister Adel Yzquierdo has said one of the plane's two black boxes had been recovered in "good condition," and the other was likely to be found. Their data will be key to determining what happened.

The 39-year-old plane, leased from a Mexican company, Global Air, was on a domestic flight to the eastern city of Holguin, where most of the passengers were from.

In Mexico, Global Air's operations were suspended so that Mexican aviation authorities can run inspections of the aircraft it leases, on the heels of the tragedy in Cuba.

The review will double inspect aircraft already certified as safe to fly, and assist as needed in the investigation of the accident in Cuba, a company statement said.

Built in 1979, according to the Mexican government, the plane last passed inspection in November 2017.

The accident happened at 12:08pm (1608 GMT). The plane crashed in a potato field close to Havana's airport. Witnesses and airport officials told AFP that the aircraft plunged as it was making its first turn after take-off.

Almost all of what remained of the plane was a mangled carcass of burned metal. It came down just 200 meters (yards) from houses between the Boyeros and Santiago de Las Vegas districts south of Havana.

A day of mourning ended early Monday, the Communist Party leader and former president Raul Castro said. Flags were flown at half-mast throughout the country.

President Miguel Diaz-Canel, who succeeded Castro as the communist island's leader only last month, appeared aghast as he surveyed the recovery efforts, wearing a short-sleeved shirt and surrounded by officials.

He visited the capital's morgue where the bodies were taken for identification, and met relatives who were being put up in a city hotel. He also visited the survivors.

Promoted
Listen to the latest songs, only on JioSaavn.com
Prior to Friday's crash, Cuba's most recent air accident was in April 2017, in which eight military personnel died when a Russian-made AN-26 transport aircraft went down in western Cuba.

International Day Of Peace 2021: Quotes, Wishes For Facebook And WhatsApp