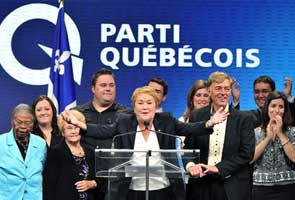 Montreal, Canada: One person was killed and another seriously wounded when a gunman opened fire during the victory speech of Quebec's newly elected separatist premier, who was unharmed, police said Tuesday.

The suspect was later caught on camera shouting "The English are waking up!" as he was being arrested. The shooting took place with Pauline Marois's Parti Quebecois projected to win Tuesday's elections in the mostly French-speaking province.

Television footage showed a man with a rifle being arrested near the concert hall in Montreal, the capital of the French-speaking province, which held parliamentary elections on Tuesday.

Marois's separatist Parti Quebecois was projected to have won the poll, ousting Premier Jean Charest and his Liberal party following months of corruption allegations and student demonstrations over a planned tuition hike.

She heads a party favoring independence from Canada, but is not expected to push for secession in the near future, as voters seemed more intent on ousting the unpopular Liberals than pursuing independence.

The incident Tuesday night occurred after Marois said that "the future of Quebec is to be a sovereign country."

Promoted
Listen to the latest songs, only on JioSaavn.com
Marois later returned to the podium to quickly conclude her speech.