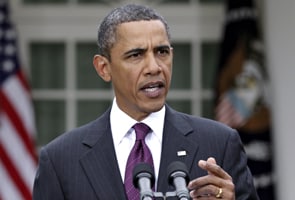 Washington: US President Barack Obama has signed an executive memorandum to provide $33 million for the refugees of Pakistan's worst floods that have claimed over 1,700 lives and affected 20 million people.

With this the total US aid to Pakistan for flood relief work has crossed $230 million - the largest foreign donor to the flood-ravaged country.

India has provided $25 million, which is routed through the United Nations.

In a memorandum addressed to Secretary of State Hillary Clinton, Obama said that it is important to America's national interest to furnish assistance an amount not to exceed $33 million from US Emergency Refugee and Migration Assistance Fund for the purpose of meeting unexpected and urgent refugee and migration needs.

It includes contributions to international, governmental and NGOs and payment of administrative expenses of the Bureau of Population, Refugees, and Migration of the Department of State, related to humanitarian needs resulting from recent devastating flooding in Pakistan.

The $230 million aid includes $150 million to support immediate relief efforts in Pakistan, through the Pakistan National Disaster Management Authority, the UN's emergency response plan and many other local and international organisations.

An additional $50 million has been allocated for initial recovery efforts to assist with rebuilding communities affected by the floods in that country.

Therefore, the US is now providing $200 million to assist with relief and recovery efforts, which does not include considerable in-kind and technical assistance specifically to address the impact of these floods.

The United States is also expanding pre-existing programs in flood-affected areas.
It has provided civilian and military in-kind assistance in the form of halal meals, pre-fabricated steel bridges and other infrastructure support, as well as air support to and within Pakistan to transport goods and rescue people at an approximate value of approximately $20 million.

US aircrafts have evacuated 10,051 people and delivered more than 2,930,000 pounds of relief supplies.

Promoted
Listen to the latest songs, only on JioSaavn.com
By September 1, the United Nations High Commissioner for Refugees (UNHCR), which the United States is supporting through the State Department, had assisted over 370,000 flood-affected beneficiaries around Pakistan.