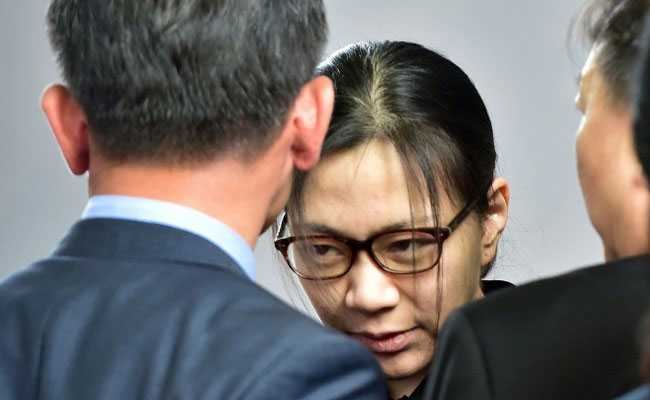 The "nut rage" heiress who forced a plane to turn back over her macadamias is fighting a bitter battle -- with activist shareholder support -- against her brother for control of the family airline, highlighting resistance to reform in South Korea's chaebols.

Cho Hyun-ah, 45, whose family control the Hanjin group that includes flag-carrier Korean Air, made headlines worldwide with her furious reaction when she was served nuts in a bag instead of a plate in first class.

A series of scandals centring on abuse of subordinates rapidly made the Chos the South's most vilified billionaires.

But now her struggle against brother Cho Won-tae could mark a watershed moment for the family-controlled conglomerates known as chaebols that dominate business in the world's 12th-largest economy.

But "you can't just run a company because you happen to be a grandson of its founder", said Lee Seung-hoon, KCGI's head of global business.

Many chaebol families retain only a small ownership stake in their companies, but maintain control through complex webs of cross-shareholdings between subsidiaries, and rapid promotions for family members.

Lee told AFP: "Many are under the delusion they have 100 percent ownership."

The Hanjin group was in financial trouble long before the coronavirus outbreak wreaked havoc on airline finances worldwide -- subsidiary Hanjin Shipping was once one of the world's top 10 container lines, but went bankrupt in 2017.

As Hanjin Shipping was collapsing, he added, the group sold valuable shares in profitable petroleum refiner S-Oil Corporation to try to prop it up.

Like many chaebols, there was no scope for dissent at the top of Hanjin, he said.

"The governance structure under the current leadership makes it impossible for the so-called independent outside board of directors to say no."

In an effort to head off some of the criticism, Hanjin says it will consider selling off non-core projects such as hotels and accused Cho Hyun-ah, KCGI and "speculative forces" of putting Korean Air's survival at risk at a time of "unprecedented crisis".

There was "no disagreement" that Cho Won-tae was "the right businessman to weather the coronavirus crisis", it added in a statement, saying he had demonstrated "excellent business performance".

The battle is on a knife-edge. Between them, Cho Hyun-ah, KCGI and ally Bando Engineering and Construction will have 32.03 percent of voting rights at next week's Hanjin Kal annual meeting, when Cho Won-tae's fate will be decided.

A year younger than his sister, he is backed by other family members and Korean Air's US alliance partner Delta Air Lines, with a total of 32.45 percent.

The chaebols played a key role in the South's rapid economic growth but have since expanded into every corner of business, and now stand accused of suffocating smaller companies and hampering innovation.

And their political connections have proved increasingly controversial -- Samsung scion Lee Jae-yong was jailed for his role in the corruption scandal that brought down president Park Geun-hye.

"It is a wakeup call to chaebol groups that if they fail to act properly and behave against shareholders' overall interests, their control could be taken away with collective action."

KCGI's drive was "the right move at the right time", he added.

But it has taken a split within the controlling family itself to create the possibility of change at Hanjin.

The rebel alliance wants to install a former SK Telecom president in top spot, and Lee denied Cho Hyun-ah was seeking a return to management.

"After a long period of consideration," he told AFP, "Cho agreed with us that Hanjin needs to be run by professionals."