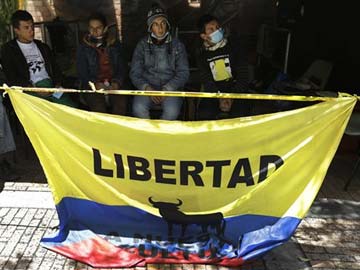 FILE - In this Aug. 13, 2014, file photo, Colombian bullfighters stage a hunger strike under a tent outside La Santa Maria bullring in Bogota, Colombia.

Bogota: Two years after Bogota's leftist mayor suspended bullfights at the capital's history-steeped bullring, a clutch of apprentice matadors is pressing for their reinstatement with a hunger strike.

The two-week-old protest outside the classically styled arena, La Santamaria Plaza, comes as the country's Constitutional Court is expected to rule on a legal attempt to force Mayor Gustavo Petro to allow the blood sport to resume in the city-owned venue.

One of the eight novices, weakened from the liquid-only diet, had to be hospitalised last week, said a comrade, 19-year-old Diego Torres. Torres said late Sunday that he and another hunger striker also might need to be hospitalised shortly. But that would not halt the strike, he said.

Soon after his election in late 2011, Petro announced that La Santamaria would no longer host the ceremonious slaughter of bulls but be devoted exclusively to non-violent entertainment. It has long served as a concert and theatre venue.

"The man has marginalised us," complained Torres. "Here, everyone looks at us like we're the scum of the earth." The apprentices have also lost income. Each earns a bit more than $330 per fight.

A former leftist rebel and anti-corruption senator, Petro annulled the contract of the Corporacion Taurina de Bogota, which organizes bullfights, after the January-February 2012 season. The company says it has the right to hold bullfights there at least through March 2015.

Few countries remain bullfighting-friendly. It remains popular in Spain, though it is no longer televised there, while the Spanish region of Catalonia banned it and neighbouring Portugal only allows bloodless fights.

In the Americas, traditional bullfights remain seasonal fare in Mexico, Venezuela, Peru and Colombia. Ecuador banned them in May 2011, only permitting the non-fatal variety.

One of nine members of Colombia's Constitutional Court, which is deciding the issue, told The Associated Press it will rule in the next week or so on whether Petro violated the constitution in refusing to rent La Santamaria out for bullfighting.

The capital has no other appropriate venue, so aficionados must travel to other towns for the spectacles.

That doesn't sit well with the city's elite, for whom Sunday afternoon corridas were big social events, regular fixtures on newspaper society pages.

Since the 1890s, the fights have drawn Spain's most celebrated matadors, who also perform in other cities. Colombia currently hosts about 100 bullfights a year.

The judge, who insisted on speaking anonymously to avoid being accused of partiality, said chances were good the court would rule in favour of the Corporacion Taurina.

Its director didn't respond to repeated phone calls to discuss the hunger strike and the apparently looming court decision.

In a tweet last week, Petro suggested the protesters are not acting alone: "How is it possible that young bullfighters can be ordered to die of hunger? Isn't that perhaps a crime?"

The apprentices, who spend their nights shivering in the tent they raised outside the ring, insist they have no financial backers.

The real criminal, they say, is Petro, a polemical figure who earlier this year successfully fought an attempt by Colombia's inspector general to unseat him for flouting the law by trying to fire private garbage haulers.

Like bullfighting's fans, the hunger-striking apprentices consider the sport a noble art, rich in tradition and well worth their personal sacrifice.

Promoted
Listen to the latest songs, only on JioSaavn.com
One of them, 23-year-old Andres Manrique, said he has already lost 13 pounds (6 kilograms).

"I'll be here until my body gives out," he said.
Comments
Gustavo PetroColombiaBogotaColombia's Constitutional Courtleftist mayor