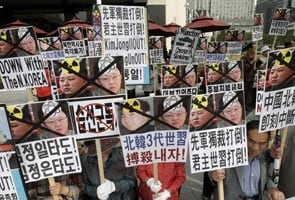 Tokyo: The eldest son of North Korea's leader Kim Jong Il says he opposes a hereditary transfer of power to a third generation of his family.

Kim Jong Nam's remarks come after North Korea unveiled his younger half brother, Kim Jong Un, as successor to their father in Pyongyang.

Japan's TV Asahi showed Kim making the remarks in footage aired Tuesday from an interview in Beijing on Saturday.

Kim Jong Nam was once considered likely to succeed his father. He reportedly fell out of favor after being caught trying to enter Japan on a false passport in 2001.

He said that while he was against the succession, it should still be accepted if there are internal factors for carrying it out.