The gathering of the Central Committee comes after Kim's Hanoi summit with US President Donald Trump broke up without agreement in February, and as South Korean President Moon Jae-in flies to Washington for talks with the US leader. 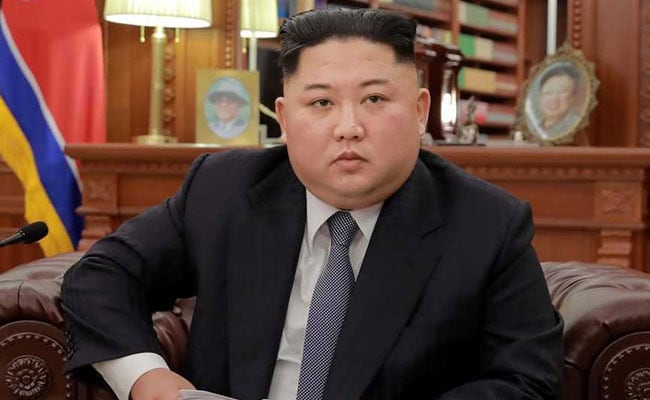 Meeting comes ahead of the opening of the country's rubber stamp legislature. (File)

North Korean leader Kim Jong Un called a full meeting Wednesday of a top committee of the ruling Workers' Party to address what he described as the "prevailing tense situation", state media reported.

The gathering of the Central Committee comes after Kim's Hanoi summit with US President Donald Trump broke up without agreement in February, and as South Korean President Moon Jae-in flies to Washington for talks with the US leader.

But the North's official Korean Central News Agency (KCNA) appeared to indicate that Kim may be focussing on Pyongyang's continued push to develop its economy.

In a meeting with senior officials Tuesday, Kim ordered them to display "an attitude befitting the masters of the revolution and construction under the prevailing tense situation and thus follow through on the new strategic line of the Party", KCNA reported.

Last April Kim declared that the ruling party's "new strategic line" would be "socialist economic construction" and its quest for nuclear development was complete.

Kim made "a deep analysis of the matters pending urgent solution in the party and state", KCNA said, adding that at Wednesday's meeting the central committee will "decide the new orientation and ways of struggle in line with the need of the prevailing revolutionary situation".

It comes ahead of the opening of the country's rubber stamp legislature on Thursday.

Cheong Seong-chang, an analyst at the Sejong Institute, said it would be difficult for Kim to lay out a new policy direction while Trump continues to express a willingness to maintain dialogue.

Instead Wednesday's meeting could involve a reshuffle of party officials including Kim Yong Chol, the North's top envoy for talks with the US, who has been "blamed the most for the failure of the Hanoi summit", he said.

"It would signal a green light if he is replaced with a more flexible and practical figure, but if he stays, denuclearisation talks won't be easy," Cheong said.

Trump and Kim held their first landmark summit in Singapore last June, where the North Korean leader signed a vaguely-worded deal on the "denuclearisation of the Korean peninsula".

But the failure by the pair to reach agreement at their second summit in Hanoi -- which broke up without even a joint statement -- has raised questions over the future of the wider process.

At the time the North said it wanted only sanctions affecting livelihoods to be lifted, but the US said Pyongyang was effectively demanding the bulk of the measures were relaxed while not being precise about what it was offering in return.

Both sides expressed willingness to talk further and Trump has repeatedly said since that he maintains good relations with his North Korean counterpart, boasting he had blocked new sanctions planned for Pyongyang.

North Korea has also been careful not to criticise Trump personally, while saying last month that sanctions against it were an "action against humanity to destroy modern civilisation and turn the society back in a mediaeval dark age".

But shortly after the Hanoi summit, a series of satellite images emerged suggesting increased activity at the North's Sohae rocket site, triggering international alarm that the nuclear-armed state might be preparing a long-range or space launch.

A senior Pyongyang diplomat told reporters last month that the North was considering suspending nuclear talks with the US.

In a move that could upset the North, US Secretary of State Mike Pompeo -- who flew four times last year as Trump's top envoy on the denuclearisation process -- agreed with Senate questioners on Tuesday that Kim is a "tyrant".