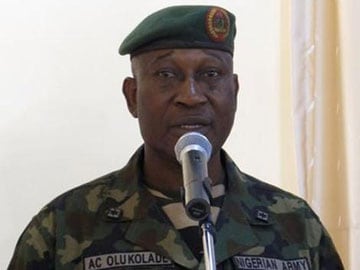 Army spokesperson, Brigadier General Chris Olukolade, talks during a news conference after a military patrol near a village in Maiduguri, northern Nigeria on June 5, 2013

Abuja: Nigeria's military said on Tuesday it had killed 50 Islamist rebels as they tried to cross the border into Cameroon, engaging them in a battle on Monday in which 15 of their own troops and five civilians also died.

Nigerian forces have stepped up a military offensive in the volatile northeast in the past few days, after their barracks in the town of Bama came under attack from Boko Haram fighters armed with grenade launchers and anti-aircraft guns on Friday.

The military often says it has inflicted significant casualties on insurgents, while rarely admitting losses among its own troops or civilians. It is usually not possible to verify casualties in the remote areas where fighting occurs.

Defence spokesman Brigadier General Chris Olukolade said the assault targeted insurgents behind the Bama attack and that 20 vehicles used in that raid had been spotted from the air and destroyed.

"Although a good number of the insurgents escaped with bullet wounds, while some have been arrested, over 50 of them died in the course of exchange of fire with ground troops in the operations to apprehend fleeing terrorists," he said.

Promoted
Listen to the latest songs, only on JioSaavn.com
President Goodluck Jonathan last month extended a state of emergency in areas worst affected by the insurgency.

A military offensive since May had initially wrested control of large parts of the northeast from the Islamists, but they retreated into the hilly area of Gwoza, near the border with Cameroon, from where they have launched deadly counter-attacks.
© Thomson Reuters 2013