Police said the suspect, a heavyset, short Black male, wore a construction vest and donned a gas mask. A massive manhunt was underway to nab him 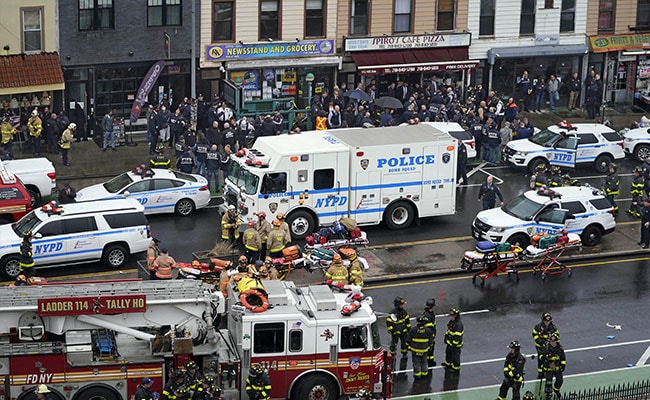 Some commuters mistake for fireworks but were really gunshots

Smoke, followed by scattered pops that some commuters mistake for fireworks but are really gunshots, then panic as a quick escape is thwarted by the subway car's locked doors.

A passenger pounds on the door of the neighbouring carriage, desperate to be let out. As the train pulls into the platform, some scream, a man grips his coffee tightly, seemingly dazed -- and others tend to the wounded who lie bleeding on the floor.

The nightmare scenes, captured by cell phone footage and described by eye-witnesses, played out on New York's N train during morning rush hour after a gunman shot ten people and left an entire city reeling.

Police later said the suspect, a heavyset, short Black male, wore a construction vest, donned a gas-mask and pulled out a smoke canister from his bag for the attack. He was still at large Tuesday evening as a massive manhunt was underway.

"As the smoke flared up it started to engulf everything," Yav Montano, who was in the car where the attack took place, told CNN.

"There was a lot of blood trailing on the floor... in the moment I did not think that it was a shooting because it sounded like fireworks," he continued. "All I saw were people trampling over each other, trying to get through to the door."

Once the train reached Brooklyn's 36th street station, passengers made a dash for the exit -- but an announcer told them to board the R train on the opposite side of the platform instead.

Sam Carmano, who was on that train, told 1010 WINS radio station: "My subway door opened into, just like calamity, and then it was people, just running to get away from whatever was happening, and then it was smoke and blood and people screaming."

Above the ground, swarms of police, fire trucks and ambulances raced to the scene and authorities cordoned off the area, emptying out several blocks in the normally bustling commercial neighbourhood.

Residents already worried about the rising tide of violent crime in America's first city said the incident had left them shaken and even more fearful.

Brooklyn local Anna Marin told AFP she had just dropped off her son at school when she saw smoke billowing and people fleeing from the station.

She wanted to collect her child right away but had to wait several hours as the school went into a lockdown.

"I'm a little shocked. And I'm hoping that it gets better because I'm noticing it's happening all over New York City," she said.