Released by broadcaster Global News, and confirmed to AFP by his campaign as being Trudeau "in the early 1990s," it depicts him in ripped jeans and a t-shirt, his arms up and dark makeup on his face. 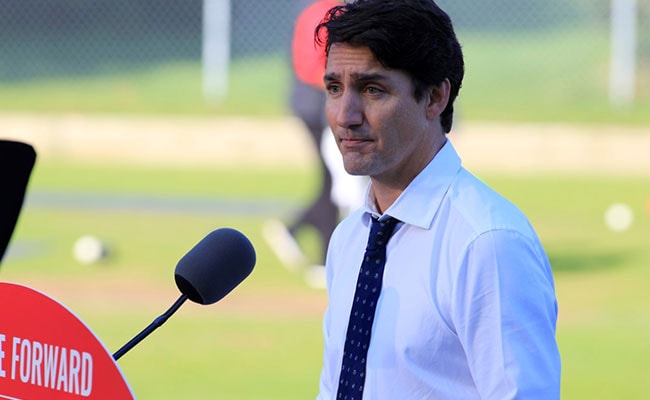 Justin Trudeau had earlier apologised for another "brownface" image.

Released by broadcaster Global News, and confirmed to AFP by his campaign as being Trudeau "in the early 1990s," the footage depicts the Liberal leader in ripped jeans and a t-shirt, his arms up and dark makeup on his face.

Late Wednesday, Trudeau apologized after Time magazine published a photograph of him in brownface makeup at an "Arabian Nights"-themed party 18 years ago.

The son of former prime minister Pierre Trudeau, who is considered the father of modern Canada, has admitted to wearing similar makeup in his teens when he sang Harry Belafonte's 1956 hit "Banana Boat Song (Day-O)" at a high school talent contest.

"I have worked all my life to try to create opportunities for people, fight against racism and intolerance," he told a televised news conference on his campaign aircraft.

"I can say I made a mistake when I was younger and I wish I hadn't. I wish I had known better then, but I didn't and I'm deeply sorry for it."

"Now I recognize it was something racist to do," he said, acknowledging that his enthusiasm for costumes -- which has also included dressing up as comic book hero Clark Kent/Superman and a "Star Wars" rebel pilot for Halloween -- has not always been "appropriate."

Trudeau, 47, whose party won a landslide victory in 2015, has already been under attack for an ethics lapse and other controversies.

The racialized images are fresh blows, coming out one week into a federal election campaign with Trudeau's party in a tight contest against the Conservatives led by Andrew Scheer. 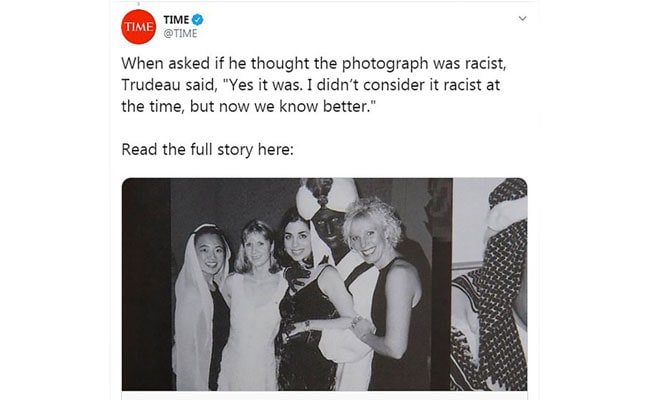 Still, Trudeau continued to press forward on Thursday with campaign stops in Winnipeg and Saskatoon. The election is scheduled for October 21.

US politicians have been mired in scandal in recent years when found to have worn blackface, which dates back to about 1830, and so-called "minstrel shows."

White performers caked their faces in greasepaint or shoe polish and drew on exaggerated lips in a caricature of blacks.

The stereotypes portrayed -- that blacks were somehow inferior, ignorant, lazy and even animalistic -- cemented racist attitudes for decades. Some of those images still persist today.

Trudeau is a fervent advocate of the multiculturalism integral to Canadian identity, and at least six members of his cabinet have Asian or African heritage.

But the scandal is sure to tarnish his golden boy image, already dented by accusations of political meddling in a bribery case against engineering giant SNC-Lavalin.

Green Party leader Elizabeth May called the Trudeau images "shameful" and urged him to "walk the talk" on progressivism, while Maxime Bernier, a former foreign minister who split with the Tories to form an upstart right-wing party, accused Trudeau of hypocrisy.

"He's the master of identity politics," Bernier said in a Twitter message, having "just spent months accusing everyone of being white supremacists."

Jagmeet Singh, an observant Sikh and leader of the third-place New Democrats, said the images showed a pattern of "deeply troubling" behavior by Trudeau.

"People who have faced injury both from physical violence and words, people who haven't been able to get jobs because of the color of their skin are waking up to see the prime minister of this country mock their lived realities," he said, "in not just one but multiple images."

"This is very painful for a lot of people."

Scheer, who has been Trudeau's most ardent critic, hammering him on ethics lapses, used the episode to once again call into question Trudeau's fitness and "moral authority to govern."

He acknowledged also that the latest video of Trudeau was provided to the Conservative campaign which passed it on to Global News.

(Except for the headline, this story has not been edited by NDTV staff and is published from a syndicated feed.)
Comments
Justin TrudeauBlackface