Gyanendra Shah was crowned the King of Nepal in 2001 after his elder brother Birendra Bir Bikram Shah Dev and his family were killed at the Royal Palace. 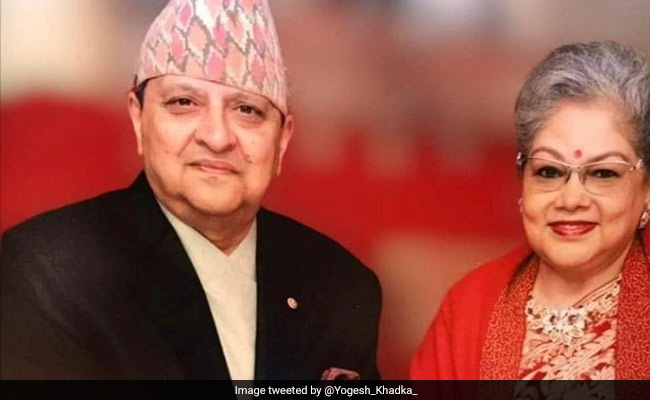 Nepal's former King Gyanendra Shah and former Queen Komal Shah have tested positive for the coronavirus on their return from India after attending the Mahakumbh in Haridwar, according to a media report on Tuesday.

The 73-year-old former King and 70-year-old former Queen recently returned from India where they had taken a holy dip at Haridwar's Har Ki Pauri during the Mahakumbh - a religious congregation of Hindu seers and devotees, according to the Health Ministry.

Their samples for the Polymerase Chain Reaction (PCR) test were confirmed positive for coronavirus infection, The Himalayan Times reported.

According to the report, hundreds of people had gathered at the Kathmandu Airport to welcome the former king and queen when they returned from India.

The authorities have started tracing anyone who came in contact with the royal couple and testing them.

Gyanendra Shah was crowned the King of Nepal in 2001 after his elder brother Birendra Bir Bikram Shah Dev and his family were killed at the Royal Palace.

An investigation blamed Birendra Bir Bikram Dev's son Dipendra, who was among the dead, for the massacre.

Gyanendra Shah stepped down in 2008, after a popular revolt forced him to abdicate, and the centuries-old monarchy was abolished, turning the country into a republic by the Constituent Assembly.

Prime Minister Narendra Modi last week appealed to the sadhus to observe the remaining duration of the Kumbh only in a "symbolic" manner in view of the coronavirus pandemic.

The Mahakumbh formally began in Haridwar on April 1 with several restrictions imposed on devotees coming to attend the event amid rising cases of COVID-19 in various states, including Uttarakhand.

A negative Reverse Transcription-Polymerase Chain Reaction (RT-PCR) test report not older than 72 hours from the time of arrival was made mandatory for devotees attending the event.

The Maha Kumbh is held every 12 years and under normal circumstances for nearly four months. Its was last held in Haridwar from January 14 to April 28 in 2010.