Contrary to her party's official position on the endorsement of the new map, lawmaker Sarita Giri registered a separate amendment proposal at the Parliament Secretariat. 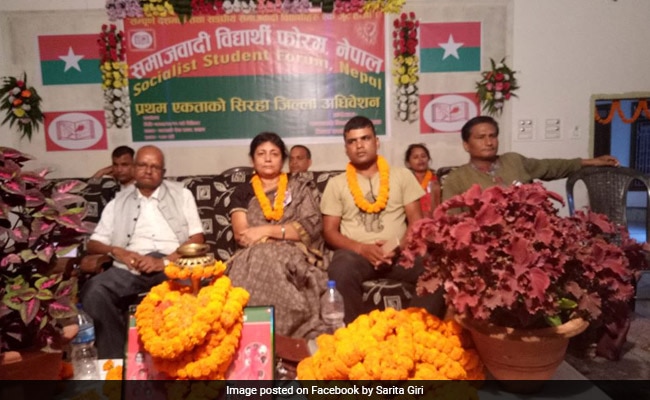 A Nepalese lawmaker was sacked by her party on Tuesday for defying its decision to unanimously endorse the constitutional amendment to revise the country's map to include three strategically key Indian territories, local media reports said.

The Opposition Janata Samajbadi Party (JSP) decided to sack Sarita Giri for breaching the party whip to withdraw her amendment registered at the Parliament Secretariat against the Nepal government's second amendment to the Constitution.

A three-member panel led by party general secretary Ram Sahay Prasad Yadav recommended that the party sack Ms Giri as a lawmaker and a party member, and the meeting of the officer bearers of the party took the decision on Tuesday, the Kathmandu Post said.

The Constitution amendment, which was aimed at updating the new administrative and political map of the country on the national emblem, was unanimously endorsed by the House of Representatives on June 18.

The JSP and the main opposition Nepali Congress had backed the move by the government of Prime Minister KP Sharma Oli.

Contrary to her party's official position on the endorsement of the new map, lawmaker Sarita Giri registered a separate amendment proposal at the Parliament Secretariat.

Ms Giri had sought to retain the old map on the national emblem arguing that there was no clear evidence to claim Lipmiyadhura, Lipu Lekh and Kalapani as Nepali territories.

The Samajbadi Party had asked Ms Giri to withdraw the amendment and warned her of internal action, but she refused to take back her amendment proposal.

The India-Nepal bilateral ties were strained after Defence Minister Rajnath Singh inaugurated an 80-km-long strategically crucial road connecting the Lipulekh pass with Dharchula in Uttarakhand on May 8.

Nepal reacted sharply to the inauguration of the road claiming that it passed through Nepalese territory. India rejected the claim asserting that the road lies completely within its territory.

Nepal later released the revised political and administrative map of the country laying claim over the strategically key areas, more than six months after India published a new map in November 2019.

India had then sternly asked Nepal not to resort to any "artificial enlargement" of territorial claims.