InSight also established that Mars is seismically active by detecting more than 1,000 marsquakes, the largest of which came in May of this year with a magnitude of 5.0 - medium-sized compared to quakes on Earth. 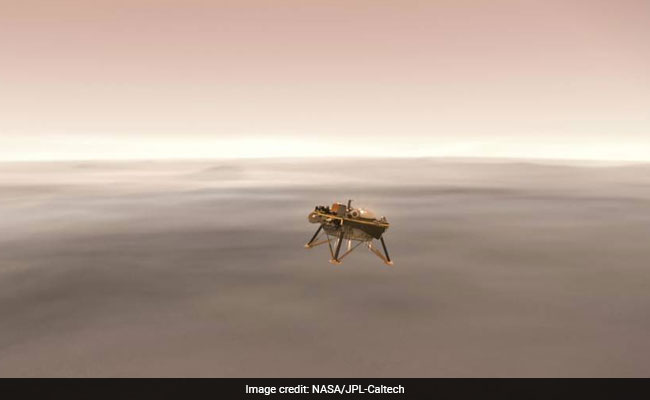 Until now, InSight had obtained data on the structure of the Martian crust.

NASA's robotic InSight lander, in the twilight of its service after nearly four years on Mars, is revealing new details about Earth's closest planetary neighbor based on data from two big meteorite impacts that shed light on the Martian crust's structure.

Researchers said on Thursday the stationary lander for the first time detected seismic waves traveling along the Martian surface, as opposed to deeper in the body of the planet, caused by two space rocks striking Mars in September and December of last year. The reverberation of these waves along the surface gave clues about the crust, the planet's outermost layer, over a wide geographical expanse in the northern hemisphere.

These were the largest impacts detected by InSight since it arrived on Mars in November 2018. Its scientific mission - originally planned to last two years but subsequently extended for two more to this December - is expected to be coming to an end because its solar panels are now covered in accumulating dust, depriving InSight of power.

Seismic waves generated by quakes and surface impacts vary in speed and shape when journeying through different material inside a planet. Data collected by InSight's seismometer instrument has helped scientists decipher the internal structure of Mars, including the size of its liquid metal core, nature of its mantle and thickness of its crust.

InSight also established that Mars is seismically active by detecting more than 1,000 marsquakes, the largest of which came in May of this year with a magnitude of 5.0 - medium-sized compared to quakes on Earth.

"InSight has been successful beyond my expectations," said planetary geophysicist Bruce Banerdt of NASA's Jet Propulsion Laboratory, the InSight mission's principal investigator and a co-author of the new research published in the journal Science. "We are likely in the final phase of the mission."

Until now, InSight had obtained data on the structure of the Martian crust - which consists mostly of fine-grained volcanic basalt rock - only in the area beneath its actual landing site.

The earlier findings indicated that the crust at the landing site was composed of relatively soft material, less dense rock. This was not the case for the other regions covered by the new data, where the crust appears denser.

There are two primary kinds of seismic waves. Surface waves travel along a planet's surface like ripples on water. Body waves traverse a planet's inner layers.

"As a consequence of our analysis of surface waves, we now understand that the crust of Mars north of the equatorial dichotomy - a conspicuous feature seen from the topographic variation on Mars that divides the southern highlands and northern lowlands - has a relatively uniform structure," said seismologist Doyeon Kim of the Institute of Geophysics at ETH Zurich, lead author of the research.

Earth's crust is divided into immense plates that move inexorably over a rocky inner layer called a mantle in a process known as plate tectonics. Crust at certain spots below Earth's oceans is constantly recycled. Mars lacks plate tectonics.

"The crust of Mars is ancient and possibly similar to Earth's crust in its first stage," Kim said.

"Two very large meteorite impacts happened within 90 days," said planetary scientist and study co-author Simon Staehler of ETH Zurich's seismology and geodynamics group. "This is significant in terms of a hazard perspective for potential future exploration of the planet and we need to understand whether this was a one-off or happens more often on Mars."