NASA Has a Robot in International Space Station 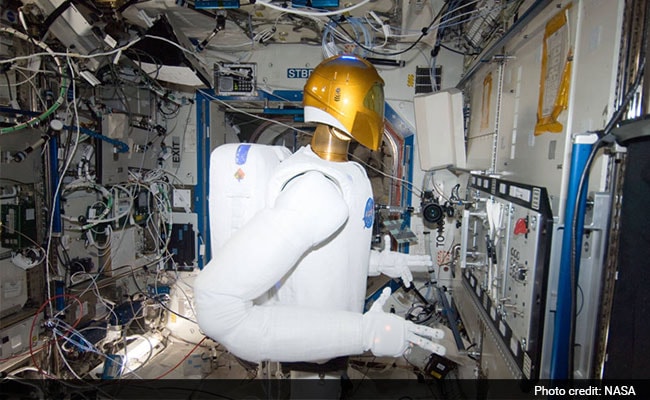 Robonaut 2 is the first robot inside a human space vehicle operating without a cage working with human-rated tools in space.

Washington: NASA has a humanoid robot on board the International Space Station. Robonaut 2 is the first robot inside a human space vehicle operating without a cage and first to work with human-rated tools in space.

Robonaut 2 was selected as the NASA Government Invention of the Year for 2014. It was chosen after a challenging review by the NASA selection committee that evaluated the robot in the areas of Aerospace Significance, Industry Significance, Humanitarian Significance, Technology Readiness Level, NASA Use, Industry Use and Creativity.

Astronauts are testing to see if Robonaut 2 - which looks like a cross between C-3PO and the Michelin Man - could be used to perform medical tasks in space, guided by doctors on the Earth, Quartz reported.

The Robonaut, which can apparently take selfies, was built by NASA and General Motors to perform tasks on the space station, as well as in the automotive industry.

"One advantage of a humanoid design is that Robonaut can take over simple, repetitive, or especially dangerous tasks on places such as the International Space Station," NASA said on its website.

NASA's Robonaut programme dates back to 1997, when scientists believed they would be able to test a robot in space by 2005. Their dream was realised in 2011, when Robonaut 2 joined the crew bound for the ISS.

Astronauts on the ISS have been testing how the Robonaut performs in minimal gravity.

NASA says its aim with the Robonaut is to free up astronauts from doing repetitive tasks, to give them more time to spend on research and critical work on the ISS.