Mount Everest, World's Highest Peak, Braces For One Of The Busiest Years

A photo of a huge traffic jam below the summit in 2012 prompted calls for better crowd management, and even a cap on the number of permits issued annually. 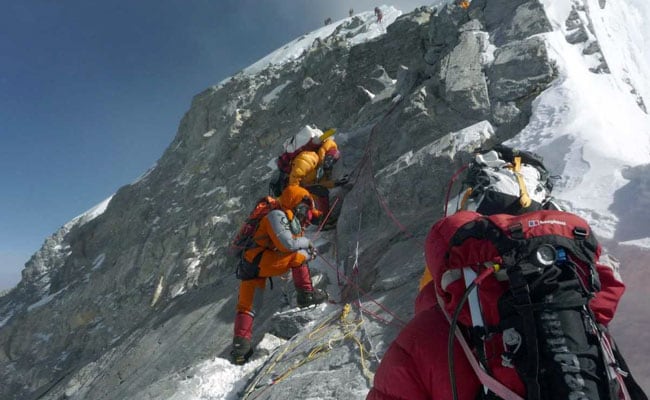 This season, the Nepal route will also see more women than ever before.

The tented city at the foot of Mount Everest is bustling as mountaineers brace for potentially the busiest year yet on the world's highest peak, prompting concerns about overcrowding and safety.

Since Edmund Hillary and Tenzing Norgay made the first ascent in 1953 more than 4,000 climbers have reached the top of Everest, according to the authoritative Himalayan Database.

Recent years have seen especially rapid growth, with the mountain opening up to more people as competition between expedition organisers has caused costs to plummet.

But rising numbers mean greater risk -- a higher chance of bottlenecks as larger teams lumber their way to the summit, potential shortages of oxygen tanks, and increased risk of frostbite and even death.

A photo of a huge traffic jam below the summit in 2012 prompted calls for better crowd management, and even a cap on the number of permits issued annually.

Nepal currently grants permits to all who apply and are willing to pay $11,000 to scale the 8,848-metre (29,029-foot) peak. This year the government has handed out 378 climbing permits according to the tourism department.

Most Everest aspirants will need the help of Nepali guides to reach the summit, meaning about 750 climbers will tread the same path to the top in the coming weeks when the weather is expected to be most favourable.

And at least 140 others are preparing to scale Everest using the northern route from Tibet, according to expedition operators, taking the potential total past the 2018 record of 807 when five people died.

'Put a limit'
Spring is the busiest time of year on the mountain as the icy winds and bone-chilling temperatures are more forgiving than at other times.

Even so the climbing season is short, with ascents expected to begin in the coming days and usually wrap up by the end of May or the first week of June.

Ice doctors, the elite Sherpa mountaineers who set the ropes to the summit for hundreds of paying clients to climb, are currently waiting for a favourable weather window to begin their ascent.

But powerful jet streams raging around the top of Everest have expedition operators worried about the number of summit days, raising the likelihood of many climbers going up at the same time.

Mountaineering blogger Alan Arnette said that problems could arise at the end of the season due to overcrowding when desperate climbers push onward to the summit despite a narrowing weather window.

"Perhaps Nepal should put a limit like China has done or the US Park Service for Denali," Arnette said.

"But I doubt Nepal ever will do this because there is too much money at stake and they seem unable to refuse business, regardless of the risks," he said.

Nepal has raked in over $4 million in Everest permit fees alone in 2019, a much-needed source of revenue for the cash-strapped country.

Expedition operator Dawa Steven Sherpa of Asian Trekking conceded that while "there are some concerns about overcrowding", mountaineering companies have become better at crowd management and are working together to schedule their teams.

"It is also a little too early to talk about (whether) the weather will impact the summit days," he said.

'Adventure of our lives'
Many of the climbers are now completing their acclimatisation ascents.

Among them is accomplished mountaineer Kami Rita Sherpa, 49, who is planning his 23rd ascent of the peak, breaking his own record for the most summits of Everest.

This season, the Nepal route will also see more women than ever before, with 76 female climbers attempting the feat.

"This is not easy to break in a male-dominated industry, but we are here to climb and prove that we can do it," Nima Doma Sherpa told AFP last month before leaving for base camp.

American climber Cory Richards and Ecuadorian Esteban Topo Mena are attempting to establish a new route on Everest, a decade after a South Korean team successfully ascended the mountain after carving a new path along its southwest face.

"Our bodies and minds feel strong and we are getting our spirits ready for the adventure of our lives," Mena said in an Instagram post on Tuesday. The duo will climb "alpine style" -- without supplemental oxygen.