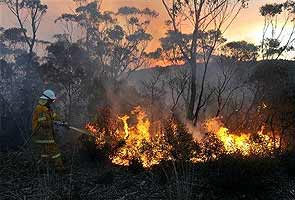 Sydney: Fire officials defended Australia's defense department today after investigators revealed a military training exercise ignited the largest of the wildfires that have torn across the nation's most populous state over the past week.

The Rural Fire Service said yesterday that one of the more than 100 fires that have burned since last week began at a Defense Department training area as a result of "live ordnance exercises." The fire it sparked near the city of Lithgow, west of Sydney, has burned 47,000 hectares and destroyed several houses, but no injuries or deaths were reported from the blaze.

In a statement, Acting Defense Minister George Brandis said the military was cooperating with investigators.

"It wasn't deliberate; it was a side effect of a routine activity, it would appear, and clearly there was no intention to see fire start up and run as a result of that activity," Fitzsimmons said. "There is no conspiracy here."

Meanwhile, police said a pilot helping fight a fire near Ulladulla, south of Sydney, was killed when his fixed-wing aircraft crashed in a remote area yesterday morning. The 43-year-old man was the only person on board.

"We are trying to recover the pilot from the scene but are being challenged by weather conditions and nearby fire," New South Wales police Superintendent Joe Cassar told reporters in Nowra, a city near Ulladulla.

The fires over the past week have killed one resident and destroyed more than 200 homes in New South Wales state.

Sixty-five fires were burning, with 24 out of control, though all emergency warnings had been lifted.

Investigators are still looking into the causes of the other fires. Some were started by power lines brought down in strong winds, the fire service said. A few appear to have been deliberately lit, and police have arrested several children in connection with those.

Promoted
Listen to the latest songs, only on JioSaavn.com
The major wildfire threat had passed Thursday, as cooler temperatures and calm winds prevailed and hundreds of residents returned to homes they had evacuated earlier.