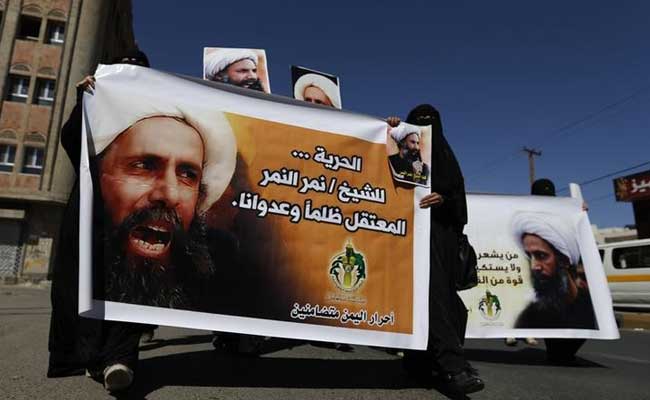 Shi'ite protesters carry posters of Sheikh Nimr al-Nimr during a demonstration outside the Saudi embassy in Sanaa. (Reuters Photo)

DUBAI: Iran accused Saudi Arabia today of using an attack on its embassy as a pretext to sever ties in a diplomatic crisis deepening their often violent struggle for influence across the Middle East.

Saudi Arabia cut ties with Iran on Sunday and fellow-Sunni Bahrain followed suit on Monday, two days after Iranian demonstrators stormed the Saudi embassy in Tehran in protest at Riyadh's execution of a senior Shi'ite cleric.

The United Arab Emirates (UAE) also downgraded its ties with Iran, as the dispute between the region's top Sunni and Shi'ite powers rippled across the region, driving up oil prices and threatening to widen the Middle East's sectarian divide.

A man was shot dead in Saudi Arabia's Eastern Province late on Sunday when security officers came under fire, and two Sunni mosques in Iraq's Shi'ite-majority Hilla province were bombed.

Iran retorted that Riyadh had used the embassy incident and an similar attack on its consulate in the Iranian city of Mashhad as an "excuse" to stoke tensions.

Stock markets across the Gulf dropped sharply, led by Qatar which fell more than 2.5 percent, with geopolitical jitters outweighing any benefit from stronger oil.

Crude importer China declared itself "highly concerned" with the developments, in a rare foray into Middle East diplomacy. The United States and Germany called for restraint, while Russia offered to mediate an end to the dispute.

In neighbouring Lebanon, newspapers said the spat had clouded the hopes of filling the vacant presidency that had been raised last month after Iran and Saudi Arabia both voiced support for a power-sharing deal.

Saudi Arabia executed Nimr and three other Shi'ites on terrorism charges on Saturday, alongside dozens of Sunni jihadists. Shi'ite Iran hailed him as a "martyr" and warned Saudi Arabia's ruling Al Saud family of "divine revenge".

Shi'ite groups united in condemnation of Saudi Arabia while Sunni powers rallied behind the kingdom, hardening a sectarian split that has torn apart communities across the Middle East and nourished the jihadist ideology of ISIS.

Al-Azhar, the Cairo-based seat of Sunni Muslim learning, and the Organization of Islamic Cooperation in Saudi Arabia, condemned the attacks on Riyadh's missions and stressed Tehran's obligation to respect the internal affairs of the kingdom.

The UAE, an ally of Saudi Arabia that is also home to hundreds of thousands of Iranians, cut the number of Iranian diplomats allowed in the country, after summoning the ambassador to protest what it called Iran's interference in Saudi Arabia.

The Yemeni government on Monday announced a curfew in the port city of Aden, a beach-head for Saudi and UAE forces waging war on the Shi'ite Houthi group that controls much of the country. A ceasefire collapsed on Saturday.