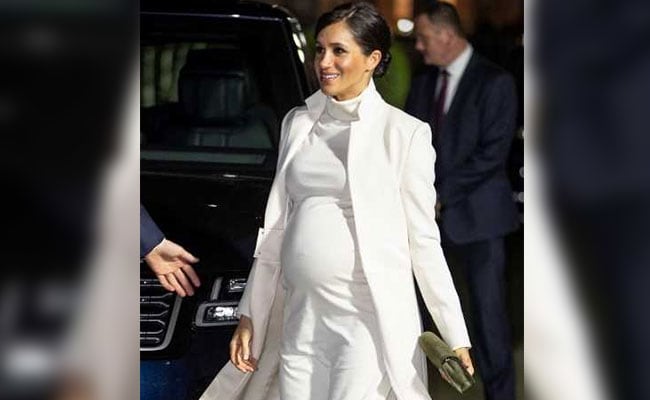 The Duchess of Sussex is celebrating the arrival of her and Prince Harry's first child.

Meghan Markle is celebrating her baby shower with friends in New York city.

The Duchess of Sussex is celebrating the arrival of her and Prince Harry's first child, who is due in April. She was spotted outside her hotel in New York City, ahead of the celebration with her closest friends, reported People.

The guest list reportedly includes stylist Jessica Mulroney, Serena Williams, Priyanka Chopra and Misha Nonoo. Meghan Markle's former co-star from TV programme Suits, Abigail Spencer, was captured arriving for the baby shower carrying a gift. She was one of the first guests to arrive. She carried a present wrapped from Book Culture in blue and green, the insider shared.

The royal mom-to-be wore dark Le Spec sunglasses and styled her hair in a classic blowout. She wore a grey coat and coupled it with black jeans and beige heels, she completed her look with a matching handbag. Meghan kept her jewellery minimal with a ring, a bracelet and small earrings.

She was seen cradling her baby bump while she headed out for the celebration on Tuesday, reported E! Online.

"The flowers were spring colors in pretty pastel shades. There were pink roses and cherry blossom vines. There were tons of flowers delivered before the shower started in an unmarked van. There was also a large flat cardboard box that appeared to be a convertible crib,' a source told E! News of the shower's decorations.

She was also seen grabbing lunch at a cafe on Tuesday. The restaurant confirmed to E! News that the Duchess of Sussex was there "with a friend having a lovely lunch."

A second source told E! News, she left The Mark at about 1 pm and headed uptown to The Met Breuer. Abigail Spencer was with her and was spotted arriving to The Mark earlier to meet up.

"They went to have lunch at the Flora Cafe but there were so many people looking through the window that she sat down, spoke to someone at the restaurant and got up and left," an insider shared.

"They then went to Boulud which is nearby and were there until about 3:05 pm. Abigail Spencer walked out holding on to her as if to help steady her friend," the insider added.

The source added, "They headed back to The Mark hotel together after that. More flowers and deliveries have been arriving at the hotel and everything seems to indicate that she will have her shower this afternoon."

Meghan's mother Doria Ragland was also spotted in Los Angeles on the day of the celebration.

A source told Harper's Bazaar as cited by E! News that Meghan's trip to New York City was planned months ago.

"The trip is a lovely chance to catch up with friends and spend time in a city she loves. This will be the last time a lot of them will see Meg until after the baby is born so it's nice to share precious moments," the source shared.

The Duke and Duchess of Sussex announced the news of her pregnancy in October. The announcement was made shortly after the couple's arrival in Australia.