Mars Once Had Ocean-Like Water On Its Surface, Claims Study 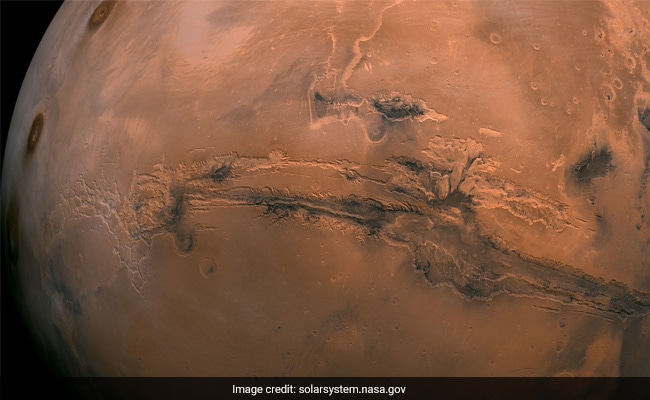 The average temperature on Mars is minus 80 degrees Fahrenheit.

Mars, the Red Planet of our solar system, is popular for its rusty iron structure present on the ground. According to American space agency NASA, the average temperature on Mars is minus 80 degrees Fahrenheit - way below the freezing temperature. In conclusion, no water can survive on the surface in any form other than ice because the atmosphere is too thin and too cold.

Now, a new study has claimed that Mars once had a global ocean up to 300 metres (almost 1,000 feet) deep, 4.5 billion years ago, if not more. The study was published by the University of Copenhagen on November 17.

"At this time, Mars was bombarded with asteroids filled with ice. It happened in the first 100 million years of the planet's evolution. Another interesting angle is that the asteroids also carried organic molecules that are biologically important for life," said Professor Martin Bizzarro from the Centre for Star and Planet Formation, in a press release.

The icy asteroids not only transported water to the Red Planet but also biologically important compounds like amino acids.

According to the latest research, the planet's ancient oceans were at least 300 metres deep. They might have reached a depth of a kilometre. According to Mr Bizzarro, there is actually not that much water on Earth.

He continued, "This happened within Mars's first 100 million years. After this period, something catastrophic happened for potential life on Earth. It is believed that there was a gigantic collision between the Earth and another Mars-sized planet. It was an energetic collision that formed the Earth-Moon system and, as the same time, wiped out all potential life on Earth."

As a result, the scientists have really solid proof that Mars had the right conditions for life to emerge long before Earth did.