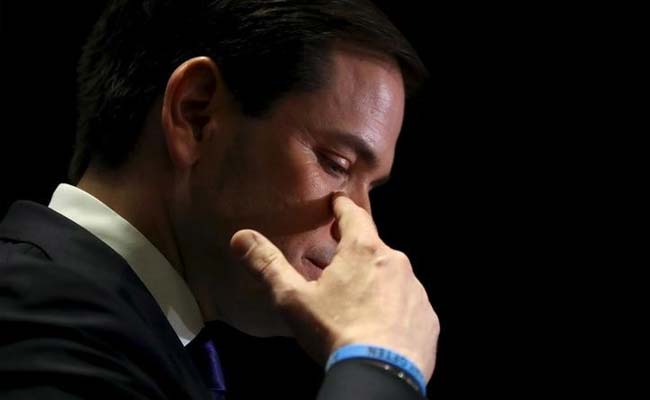 Republican US presidential candidate Marco Rubio announces the suspension of his presidential campaign during a rally in Miami, Florida. (Reuters Photo)

Miami, Florida: US Senator Marco Rubio suspended his campaign for the Republican presidential nomination on Tuesday, having lost his home state of Florida despite support from a party establishment worried about the rise of billionaire Donald Trump.

It was a second straight disappointing week for Rubio. Last week in nominating contests in Michigan and Mississippi, he drew only single-digit support.

A first-term senator, Rubio had been considered by many mainstream Republicans to be the last best option to defeat billionaire businessman Trump and US Senator Ted Cruz of Texas for the party's nomination for the November 8 election.

His voice strained and hoarse, Rubio did not launch the attack on Trump that many observers had expected, but instead seemed to rationalize the anger he said that led so many of his fellow Floridians to support Trump over himself.

In recent weeks Rubio had become more aggressive in attacking Trump. The personal insults appeared to backfire and Rubio later said he regretted them.

After former Republican Governor Jeb Bush quit the race, Rubio drew some of his financial backers to his side. But it took weeks for him to win a primary, notching wins only in Minnesota, Puerto Rico and Washington, D.C.

Supporters had encouraged Rubio to get out of the race before the Florida voting after he consistently trailed in opinion polls, arguing that losing to Trump in the primary in his own state would hamper his future in politics.

Rubio has already said he will not run for re-election to his Senate seat. There has been speculation he could run for governor in 2018.

"History has shown Republicans never mind a second act and if a Trump candidacy fails, Rubio is likely to be the starting point the GOP looks to as it charts the way back from another White House defeat," said Texas-based Republican strategist Joe Brettell.

Rubio's departure leaves three candidates in the race - Trump, Cruz and Ohio Governor John Kasich. Establishment Republicans will now likely give Kasich a hard look, since most oppose Trump or Cruz being the nominee.

Once he announced he was suspending his campaign, there were cries of "No!" and "Don't quit!" but most in the crowd had seemed to know what was coming. Volunteers in T-shirts began to weep and hug one another. The rest of the crowd left the arena for the balmy night.
© Thomson Reuters 2016