He Nearly Drowned. He's Suing Cops, Lifeguard Who Pulled Him Out Of Pool

Fijalkowski was left underwater for more than two minutes, he says in a lawsuit filed in the Eastern District of Virginia on Friday. 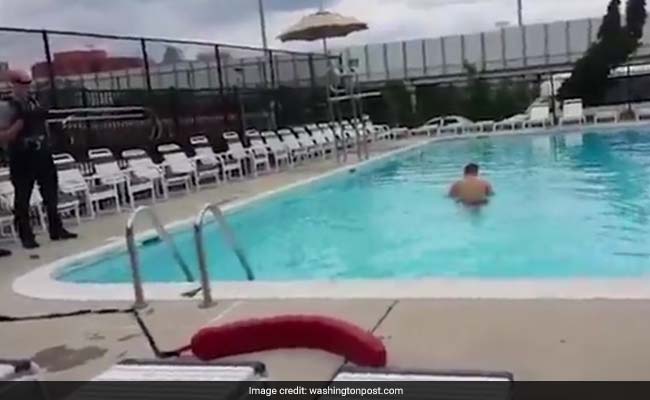 Video shot by a bystander shows Fijalkowski in the Fairfax pool under water for over two minutes.

When he was made assistant manager of a pool in Fairfax, Virginia, two years ago, Mateusz Fijalkowski spoke barely any English and did not know how to swim.

In the United States from Poland on a summer program, Fijalkowski spent most of his time here hospitalized after nearly drowning in that pool. Now Fijalkowski, 23, is suing the police officers and lifeguard who pulled him out.

Often police are sued for being too aggressive with mentally ill people; in this instance, they are accused of not doing enough to stop a man in the midst of a bipolar episode.

Fijalkowski was left underwater for more than two minutes, he says in a lawsuit filed in the Eastern District of Virginia on Friday, while eight police officers watched and stopped a lifeguard from jumping in to help. Police contend that the officers acted appropriately to both save him and protect the lifeguard and themselves from a disturbed person.

When the lifeguard did pull him out, according to his lawsuit, Fijalkowski had stopped breathing and had no pulse.

"The police allowed me to sink before their eyes," Fijalkowski said in an email, in Polish. "I'm glad that in the end they realized that they shouldn't let me drown, but I don't thank them for letting me die, clinically, before their eyes."

He is suing because he has more than $100,000 in medical bills from the episode, he said.

"They saved his life - he did not die," Fairfax County Police Chief Edwin Roessler said in an interview. "You're going to sue someone for saving your life?"

Roessler said that had officers or the lifeguard gone in earlier, they might have gotten dragged under the water themselves.

Fijalkowski came to the U.S. from Poland through an international summer job program, according to his complaint. He said he was told he could work at a pool despite not knowing how to swim. At the time, he had never had any mental health episodes.

He began working as a pool attendant at the Riverside Apartments in Fairfax County on May 26, 2016, according to his suit, three days after his arrival. He was trained to clean the pool, arrange the deck chairs and check the water's pH level.

On his third day of work, he began acting strangely. He started arguing with guests and talking to himself in Polish. After he ripped off one girl's wristband and said she could not enter the pool, a lifeguard called the police. 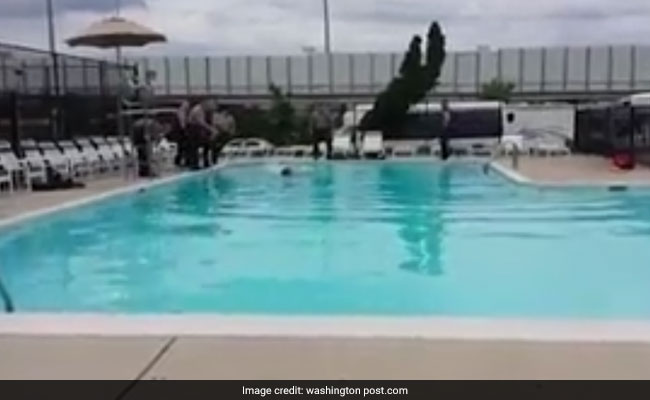 Mateusz Fijalkowski was trained to clean the pool, set the deck chairs and check the water's pH level

Twice, Fijalkowski threw his cellphone in the shallow end of the pool and retrieved it. He climbed the lifeguard tower, shouted and blew his whistle.

Then he entered the pool a third time. In a video taken by a bystander through the pool's fence, Fijalkowski can be seen walking slowly into the deep end until he is completely submerged under the eight-foot-deep water. According to an account given by one officer and provided by the plaintiff, he then grabbed two vents on the bottom of the pool and held himself down.

In the video, Fijalkowski is seen below the water for more than two-and-a-half minutes as officers walk around the pool and watch. Then Sean Brooks, Fijalkowski's supervisor and a lifeguard, jumps in and begins to pull him out.

Several police officers follow Brooks into the water and are seen on video helping drag Fijalkowski from the pool. They perform CPR for several minutes until emergency medical technicians arrive and revive Fijalkowski with an electronic defibrillator.

According to an account from the pool company included in court documents, the police would not let Brooks jump in until Fijalkowski had stopped moving. In their reports, several officers said they moved to enter the pool as soon as they realized that Fijalkowski had gone still.

Fijalkowski had vomited in the pool, according to an EMS report provided by the plaintiff, and suffered cardiac and respiratory arrest.

Officers told medical staff that Fijalkowski had been underwater for 30 to 60 seconds, according to a hospital report obtained by the plaintiff.

Fijalkowski was in Fairfax Inova's Heart and Vascular Institute until June 8, according to his attorney, and then in a psychiatric unit for six days, where he was diagnosed with bipolar disorder.

He said in his email that he is now back in Poland, on medication, and has not had an episode since.

Roessler defended his officers' actions, saying they were right to avoid a physical altercation with a man who had been acting violently and erratically.

"When someone's having a mental episode, the last thing you want to do is go hands on," Roessler said. "You use time on your side to let the episode subside."

Victor Glasberg, Fijalkowski's attorney, argues that on the contrary, police are trained to take people in distress into custody. They could have stopped him from going into the pool the third time, he said in the suit. Once he did go in and stayed underwater so long, they should have rescued him or allowed the lifeguard to do so, he added.

Promoted
Listen to the latest songs, only on JioSaavn.com
Brooks is included in the lawsuit for acquiescing to the police, Glasberg said. The pool company did not immediately return a request for comment.

"There's no way to Monday-morning-quarterback this stuff," Roessler said. "Everybody there saved this young man's life."