Muhyiddin Yassin took the oath of office at the national palace in Kuala Lumpur. 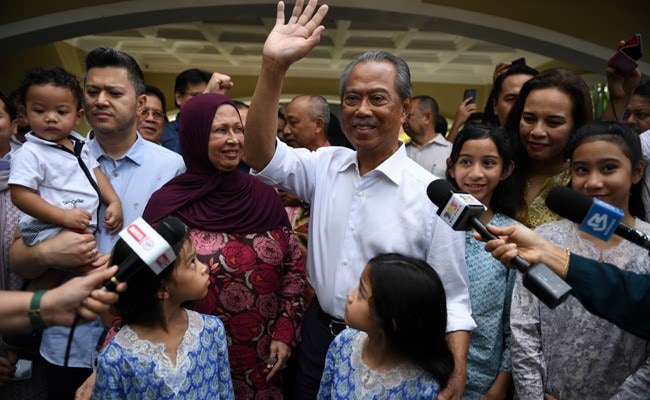 Muhyiddin Yassin and his family wave to the press outside his home in Kuala Lumpur. (AFP)

A former interior minister was sworn in as Malaysia's premier on Sunday, marking the return of a scandal-mired regime to power after the last government's collapse but ex-leader Mahathir Mohamad slammed the move as illegal.

Muhyiddin Yassin took the oath of office at the national palace in Kuala Lumpur, capping a week of political turmoil following the collapse of the former ruling coalition and Mahathir Mohamad's resignation.

The Southeast Asian nation was plunged into turmoil a week ago following the collapse of 94-year-old Mahathir Mohamad's reformist "Pact of Hope" alliance, which stormed to a historic victory in 2018 against a government mired in corruption allegations.

Mahathir Mohamad -- the world's oldest leader -- then quit and triggered a race for the premiership, which he lost to little-known Muhyiddin Yassin, who heads a coalition dominated by the country's ethnic Malay Muslim majority.

The decision by the monarch to pick Muhyiddin Yassin on Saturday caused widespread anger that the democratically elected government was being ejected, while Mahathir Mohamad insists he in fact had enough support to become leader again.

The king appoints the country's prime minister, who must prove he has the support of the majority of MPs.