Gove, a leading proponent of Brexit, "physically ripped it up to show he wasn't prepared to accept the document as a summary of their discussions," The Sun newspaper reported. 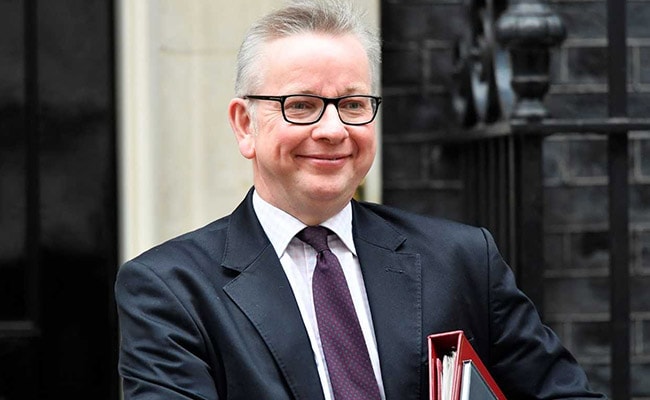 Michael Gove a leading proponent of Brexit was reportedly "livid" and tore up the papers. (File)

Britain's Environment Secretary Michael Gove ripped up plans for possible future customs arrangements with the EU, according to reports Saturday, as tensions within the cabinet over Brexit continue to surface.

Gove was reportedly "livid" and tore up the papers detailing Prime Minister Theresa May's preferred option for a future customs partnership with the European Union, after concluding his concerns about the proposals had been downplayed, the reports said.

Gove, a leading proponent of Brexit, "physically ripped it up to show he wasn't prepared to accept the document as a summary of their discussions," The Sun newspaper reported.

The account of the incident was later confirmed by the BBC, citing aides to the minister.

May will gather together her warring ministers for a key Brexit summit on Friday to thrash out Britain's plans for issues including trade and customs after it leaves the EU next year, as pressure intensifies for them to agree to a unified stance.

The cabinet, which has been publicly disagreeing on various aspects of Brexit, is in deadlock over two options for customs arrangements after the March 29, 2019 withdrawal date.

A "maximum facilitation" model proposes using trusted-trader arrangements and technology to avoid border checks, while a "customs partnership" system would see Britain collect tariffs on behalf of the EU for goods heading to the continent.

Two groups of cabinet members have been looking at each of the plans.

Gove was reportedly among the ministers examining the partnership model, largely opposed by Brexiteers, and was reacting to a summary report of their supposed position on it prepared by civil servants.

European Union president Donald Tusk issued a "last call" on Friday for Britain to explain what it wants from Brexit, as the bloc warned time was running out and stepped up preparations for the prospect of no deal.

The Independent newspaper said Sunday EU leaders had given up hope of reaching an agreement by the next summit in October, as originally envisaged by both sides.

The aide to Donald Trump reportedly used the meeting to stress the US president's enthusiasm for Britain's withdrawal from the EU and his belief that the two countries can agree a trade deal within two years of its departure.

No government officials were present at the meeting, and Downing Street was not informed about it, the paper said.

Speculation is growing that Trump will decide to meet Tory Brexiteers privately when he visits Britain on July 13, further undermining May, it added.

(This story has not been edited by NDTV staff and is auto-generated from a syndicated feed.)
Comments
Brexit customs planMichael GoveTheresa May