Lieutenant Colonel Alexander Vindman was escorted out of the White House where he worked on the National Security Council. 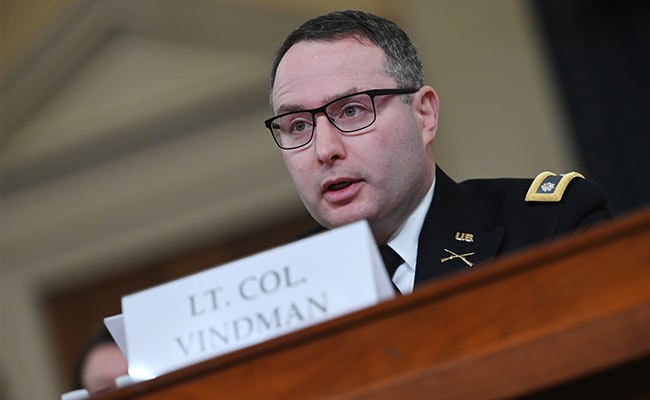 A US Army officer who testified at the hearings in the House of Representatives which led to the impeachment of President Donald Trump was ousted from his White House job on Friday, his lawyer said.

Lieutenant Colonel Alexander Vindman was escorted out of the White House where he worked on the National Security Council, with his lawyer calling the move an act of revenge by the president.

"I'm not happy with him," Trump, who was acquitted by the Senate on Wednesday of charges of abuse of power and obstruction of Congress, told reporters.

Vindman, who served as director of European affairs on the National Security Council, was on the July 25 phone call during which Trump asked Ukrainian President Volodymyr Zelensky to open an investigation into his political rival Joe Biden.

Subpoenaed by Congress to testify at the House impeachment hearings, the Ukrainian-born Vindman, who received a Purple Heart for wounds suffered in Iraq, said Trump's actions were "improper."

"It is improper for the president of the United States to demand a foreign government investigate a US citizen and a political opponent," Vindman said.

Vindman's lawyer David Pressman said the army officer was "escorted out of the White House where he has dutifully served his country and his President."

"There is no question in the mind of any American why this man's job is over," Pressman said in a statement. "Vindman was asked to leave for telling the truth.

"The truth has cost LTC Alexander Vindman his job, his career, and his privacy," he said. "He served his country, even when doing so was fraught with danger and personal peril.

"And for that, the most powerful man in the world -- buoyed by the silent, the pliable, and the complicit -- has decided to exact revenge," Pressman said.