Libyan Cleared Of US Envoy's Murder In Benghazi, Convicted Of Terror

The 2012 attack, undertaken on the 11th anniversary of the 9/11 attacks, was carried out by some 20 men armed with grenades and heavy weapons. 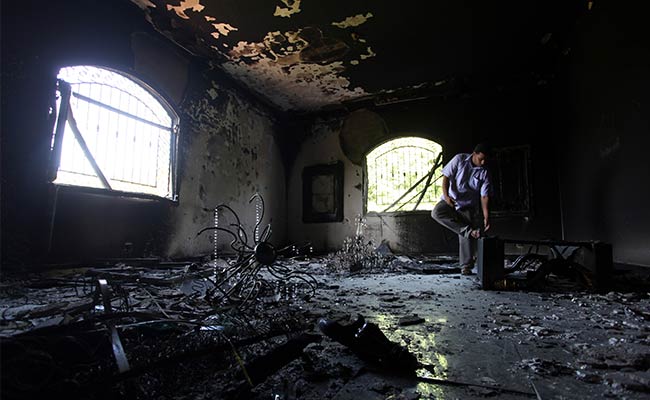 After weeks of trial in a civilian court in Washington, a jury cleared Ahmed Abu Khattala (File)

Washington: A Libyan man accused of masterminding the 2012 Benghazi attack that killed a US ambassador and three others was acquitted Tuesday of murder but convicted on lesser terrorism charges.

After a seven-week trial in a civilian court in Washington, a jury cleared Ahmed Abu Khattala -- the first person tried over the fiery raid on the US complex in the Libyan coastal city -- of the most serious of the charges he faced.

Prosecutors were apparently unable to prove to the jury that Khattala, leader of a group who had been photographed watching the attack on September 11, 2012, was directly to blame for the deaths of US Ambassador Christopher Stevens, a second state department official, and two CIA contractor guards at the consulate and a CIA annex.

He was convicted of only four of 18 charges he faced: supporting terrorists, conspiracy to provide support to terrorists, carrying a semi-automatic weapon during a violent crime, and damaging US property.

That was far weaker than the picture prosecutors had presented of Khattala as the person who plotted and directed the deadly assault.

His trial was seen as a test case for foreign terror suspects forcibly brought to the United States and placed before civilian courts.

"This investigation demonstrates the FBI's ability to investigate terrorist attacks against Americans even in the most difficult conditions, determine who perpetrated the acts and bring those actors to justice," he said in a statement.

The 2012 attack, undertaken on the 11th anniversary of the 9/11 attacks, was carried out by some 20 men armed with grenades and heavy weapons.

Stevens and the second State Department official, Sean Smith, died of smoke inhalation after the consulate caught fire, while the two CIA contractors, Glen Doherty and Tyrone Woods, were killed in the firefight by mortar rounds.

US prosecutors said Khattala was at the scene in regular contact with the attackers via cellphone before, during and after the assault.

The death of Stevens stunned Americans and became the focus of a politically charged investigation by congressional Republicans of then-secretary of state Hillary Clinton, who was accused of not protecting the diplomats.

Khattala was captured in 2014 in a raid by US special forces, who then placed him aboard a navy ship where he was interrogated for a week before being delivered to the United States.

The raid and the legal case were based in part on a Libyan informant, an associate of Khattala, who was eventually paid a $7 million reward and granted asylum in the United States.

There was no immediate reaction from the White House.

"We lost two of our own that night -- Glen Doherty and Tyrone Woods -- who ran to the sound of the guns and bravely fought to protect Americans and the two US facilities that were attacked."

Promoted
Listen to the latest songs, only on JioSaavn.com
The US continues to pursue other attackers in the case. On November 4 a second Libyan accused of involvement in the Benghazi attack, Mustafa al-Imam, was put on trial in the same Washington court, days after being captured and brought to the United States.

Al-Imam was accused of being one of the men who attacked the consulate.