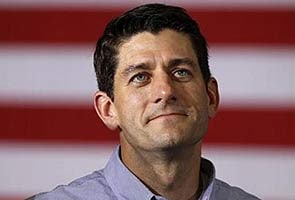 Here are some key facts about Ryan.

Ryan, 42, a rising star among the fiscal conservatives who dominate the Republican Party, has served seven terms in the House of Representatives since first being elected in 1998 on a platform opposing tax increases and espousing gun rights.

A budget hawk committed to slashing federal spending and promoting small government, he put forward a controversial plan in 2009 to reform the tax code and eliminate the federal deficit, relying on tax cuts, reduced spending and a drastic overhaul of healthcare entitlements for the elderly. It was defeated in the House but the plan has become closely associated with him.

Both his father and grandfather died of heart attacks in their 50s, making Ryan mindful of a healthy lifestyle. He leads some of his fellow lawmakers in a gruelling daily exercise group. He is also a fan of the P90X DVD workout and his off-the-clock hobbies include hunting, fishing and camping.

Ryan became the top-ranked Republican member of the powerful House Budget Committee in 2007 and the committee's chairman in 2011 after the Republicans took control of the House in the 2010 mid-term elections.

He has spent most of his career in Washington and has had little business experience beyond a stint at the construction firm his great-grandfather started.

Ryan is recognized as an articulate and nimble debater who has a sense of humor and intellectual heft. Even Democrats say they admire his grasp of complicated fiscal issues and his sincerity in attacking problems contributing to a mountain of U.S. debt. President Barack Obama has commended Ryan for his serious approach to budgeting, while attacking the specific proposals.

Ryan is perhaps best known for his proposal to restructure the popular government-run Medicare program by giving the elderly a set amount, or voucher, to buy private health insurance, a move he says is necessary to save the system. Democrats say that would cost American seniors thousands of dollars a year and accuse Ryan of trying to balance the budget on the backs of the disadvantaged.

Ryan is a Roman Catholic. He has tempered his publicly stated strict anti-abortion position since becoming Romney's running mate, saying a Romney-Ryan administration would permit the procedure in cases of rape and incest and when a mother's life is in danger.

He was born and raised in Janesville, Wisconsin. He is a fifth-generation resident of the state, which voted for Obama in 2008 but is a hotly contested battleground in this year's White House race. Ryan frequently cites his Midwestern roots and is an avid Green Bay Packers football fan.

Ryan graduated in 1992 with a double major in economics and political science from Miami University in Ohio. He has named conservative economist Milton Friedman and pro-capitalist philosopher and novelist Ayn Rand among his heroes.

When Congress is in session, Ryan sleeps in his Capitol Hill office instead of renting a home in Washington. He says the practice makes sense because he often works to midnight and gets up at 6 am. He showers at the gym. He travels back to Wisconsin frequently to spend time with his wife, Janna Little, a tax attorney, and their three young children.

Ryan was largely absent from the big fiscal debates of 2011 - from Republicans' showdown with Obama over a deficit-reduction plan, to the failed "super committee" effort to find an additional $1.2 trillion in savings, and the fight over a payroll tax cut extension. Ryan voted against a massive deficit-reduction proposal floated by a presidential commission in 2010, complaining that it did not do enough to control healthcare costs and relied heavily on tax increases.

When navigating the halls of Congress, Ryan almost always is seen listening to music through earbuds, making it easier for him to breeze past reporters. His favorite bands include Rage Against The Machine and Led Zeppelin.
© Thomson Reuters 2012
Comments
US presidential elections