The Boeing 777 jet with 239 people on board vanished on March 8, 2014 during a routine flight from Kuala Lumpur in the world's greatest aviation mystery. 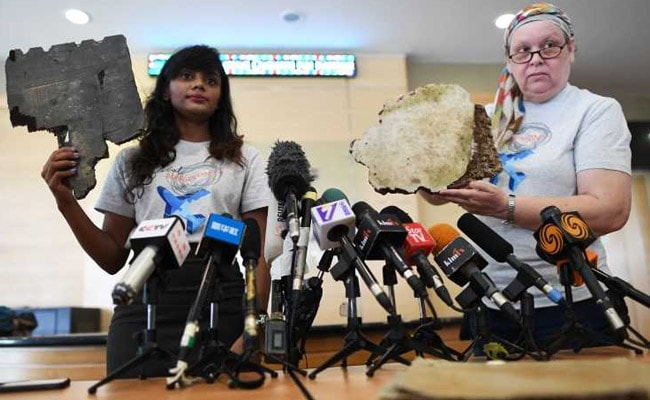 Daughter of a Malaysian Airlines flight MH370 passenger hands over a piece of debris. (AFP)

Relatives of some of the people missing on Malaysia Airlines flight MH370 urged Malaysia on Friday to resume a search for the plane that disappeared in 2014, as they handed over what they believe are five new pieces of debris from it.

Flight MH370 was on its way from Kuala Lumpur to Beijing on March 8, 2014, with 239 people on board, when it vanished, and became one of the world's greatest aviation mysteries.

The next of kin of some of those on board handed the government the five pieces of debris they said had been found by villagers in Madagascar, in three difference locations, one bit found as recently as August.

"The fact that debris is still washing up now means that the investigation should still be live. It shouldn't be closed," said Grace Nathan, a lawyer whose mother, Anne Daisy, was on the plane.

Malaysian and international investigators believe the jet veered thousands of miles off course before plunging into the Indian Ocean.

In July, investigators released a 495-page report, saying the plane's controls were likely deliberately manipulated to take it off course but they were not able to determine who was responsible.

More than 30 bits of suspected debris have collected from various places around the world but only three wing fragments, which washed up along the Indian Ocean coast, have been confirmed to be from MH370.

Transport Minister Anthony Loke, who met the next of kin, said the government would consider resuming a search if provided with credible leads.

"We are open to proposals, but we must have some credible leads before we decide," Loke said.

In May, Malaysia called off a three-month search by U.S. firm Ocean Infinity, which spanned 112,000 sq km (43,243 sq miles) in the southern Indian Ocean and ended with no significant findings.