US Teacher Charged With Assault For Dragging Autistic Child Through School

Police learned the teacher was taking disciplinary action against the student and, when he would not walk, she dragged him where to she wanted him to go. 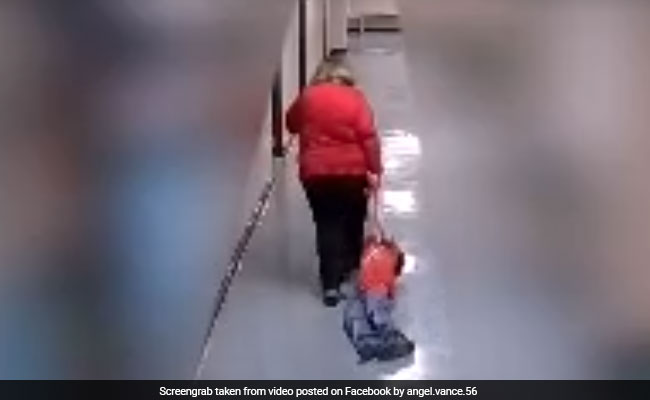 The video of the incident shows Trina Abrams dragging the child through the school's halls.

A special-education teacher emerged from a classroom, dragging a student with autism through the hallways of an elementary school in Kentucky.

After a moment, the teacher, who was later identified by the authorities as Trina Abrams, stopped and asked the 9-year-old boy, "You want to walk?"

"OK," she responded, then the young child let out a moan as she continued to pull him by his wrists, dragging his limp body across the slick floor.

The child's mother, Angel Nelson, told ABC affiliate WCHS that she was "horrified" when she first learned that her son, who has autism among other special needs, was dragged by a teacher through his school. The mother said she posted surveillance footage of the October incident on Facebook last weekend because she wanted him "to have a voice." The video has since been viewed hundreds of thousands of times, prompting widespread outrage and calls for change.

"It broke my heart when I saw the video and I saw all of his new classmates and his friends along the wall, watching him being dragged down the hallway," Nelson told the station.

Abrams, who was fired this week from Wurtland Elementary School in Greenup County, Kentucky, appeared in court Wednesday, where she pleaded not guilty to an assault charge, her attorney said.

Abrams' attorney, Matthew Wisecup, said in an email Wednesday to The Washington Post that his client "maintains her innocence" and "intends to fight this charge in court."

The video of the incident, which occurred Oct. 24, shows Abrams dragging the student by both arms. Then, when one of his arms fell to the ground, she continued to pull him by one wrist.

Abrams stopped a second time, again asking the child whether he wanted to walk. When he said no, she ordered him to "get up." He refused and she pulled the child into a standing position.

The child then collapsed to his knees, and Abrams proceeded to pull him through the hallways while he was in the kneeling position.

Kentucky State Trooper David Boarman, a spokesman for the State Police, said once the school learned about the incident, administrators called social services, which then alerted authorities. During the investigation, he said, police learned that Abrams was taking disciplinary action against the student and, when he would not walk, she dragged him where to she wanted him to go.

Boarman said Abrams was arrested on a charge of assault in the fourth degree against a victim under 12, which is a lesser charge, because MRI tests on the boy after the incident were "inconclusive," so "we couldn't substantiate any substantial injury" against the student.

Greenup County Schools Superintendent Sherry Horsley said that after the incident, school officials followed "established safety protocol," explaining in a statement to The Post that the "parent was contacted immediately and the student was assessed by the school nurse and referred for outside medical evaluation." The superintendent also confirmed that the teacher was "removed from the school."

(Except for the headline, this story has not been edited by NDTV staff and is published from a syndicated feed.)
Comments
KentuckyautismAutistic child