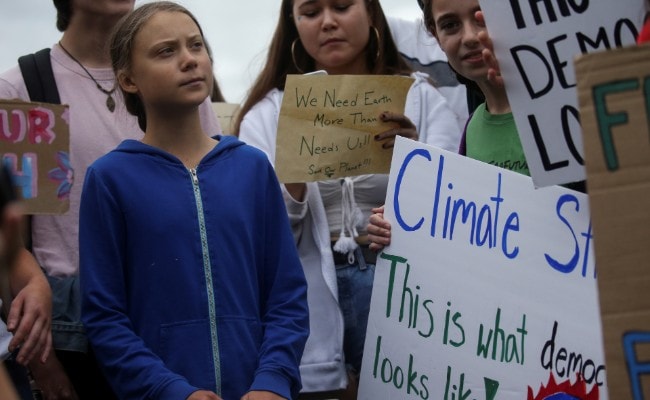 Greta Thunberg spurred millions of youths to protest, drawn by her determination.

Canadian Prime Minister Justin Trudeau announced he would take part in a climate action march on Friday led by Swedish teen activist Greta Thunberg as the environment emerges as a key election issue.

His main rival Conservative leader, Andrew Scheer, will be campaigning elsewhere, but the rally in Montreal is expected to draw other party leaders as well as Trudeau, leader of the Liberals.

Trudeau, who faces tough elections October 21, on Thursday paddled up in a canoe in Sudbury, Ontario to announce he would be marching in Montreal with thousands of other Canadians to "fight for the environment."

"There has been an extraordinary amount of mobilization by young people, and by Canadians across this country and indeed around the world, calling for real action on climate change," he said.

Schools, colleges and universities have suspended classes for the day, and the city government has encouraged staff to take the day off.

Thunberg, 16, on Monday accused world leaders in a rousing "How Dare You?" speech at the UN climate summit of betraying her generation.

"You have stolen my dreams and my childhood with your empty words," she thundered, visibly angry and close to tears.

The teen has spurred millions of youths to protest, drawn by her steely determination despite her years.

She is expected to speak at a press conference before the march starts at noon (1600 GMT).

Organizers said Thunberg also will take aim at airlines' skyrocketing CO2 emissions in a speech outside the UN aviation agency in Montreal, which is holding its annual conference.

The International Civil Aviation Organization's 193 member states this week are taking stock of the implementation of a climate plan unveiled at its last general assembly in 2016.

Aviation accounts for about two percent of global greenhouse gas emissions, according to the ICAO.

Thunberg sailed across the Atlantic for the UN climate summit in New York specifically to avoid flying.

In his first term, Trudeau cast himself as a champion in the fight against global warming, but his green image was tarnished by his nationalization of an oil pipeline to salvage the construction project after years of delay.

His campaign was rocked last week by images that emerged of him wearing blackface makeup when he was a student and young teacher.

Recent polling put the Conservatives slightly ahead of the Liberals in the election race.

(Except for the headline, this story has not been edited by NDTV staff and is published from a syndicated feed.)
Comments
Justin TrudeauGreta Thunberg