Kate Moss denied Amber Heard's claim that Johnny Depp had pushed her down the stairs in the nineties. 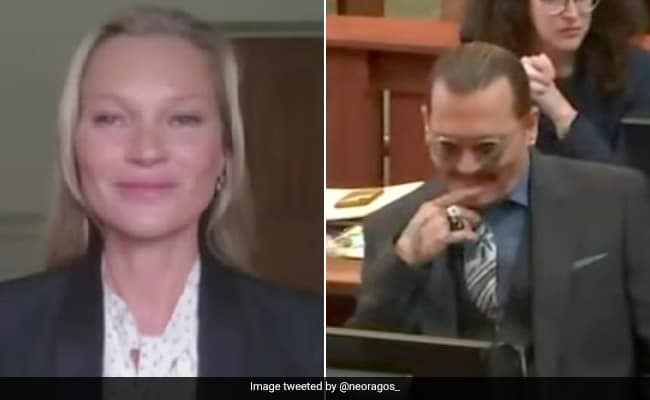 Johnny Depp appeared to smile at his ex-girlfriend Kate Moss after she testified in his defamation trial against Amber Heard, and his grin received a notable reaction from social media users.

On Wednesday, Ms Moss testified via a video link. She denied Ms Heard's claim that Mr Depp had pushed her down the stairs in the nineties. The model, who dated the Hollywood actor between 1994 and 1998, said that she did fall down a set of stairs when she and Mr Depp were on holiday in Jamaica and that he had helped her up at the time.

Ms Moss said, “As I left the room, I slid down the stairs and I hurt my back. I screamed because I didn't know what had happened to me and I was in pain. He came running back to help me and carried me back to my room, and got me medical attention.”

The model added that the Pirates and the Caribbean actor “never pushed me, kicked me, or threw me down any stairs.”

Following her very short testimony, social media users were quick to spot that Mr Depp appeared to be grinning at the screen on which he was watching Ms Moss' testimony.

Internet users were delighted to see Mr Depp's reaction and they even praised Ms Moss for debunking the rumour, which was brought up by Ms Heard who said that an alleged incident involving the Hollywood actor and her sister had reminded her of another moment during which she alleged that Mr Depp pushed Ms Moss down the stairs when they were dating in the 1990s.

A third user praised the supermodel and wrote, “Kate Moss is a legendary model and has never testified in any court proceedings before. The fact that she agreed to take the time to testify on behalf of Johnny Depp, thirty years after they dated, speaks volumes.”

It is to mention Johnny Depp is suing Amber Heard for defamation over a 2018 op-ed she wrote for The Washington Post about surviving domestic violence. On the other hand, Ms Heard is countersuing Mr Depp, accusing him of orchestrating a “smear campaign” against her and describing his lawsuit as a continuation of “abuse and harassment”.

The trial continues and closing arguments are expected on Friday.