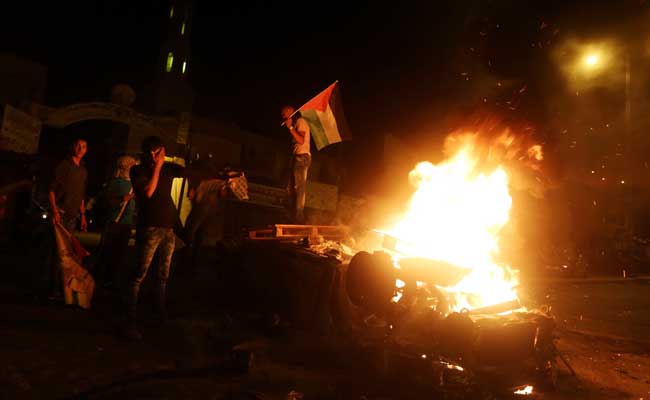 Palestinian youth stand wave the national flag on the car that was set on fire by Palestinians as it entered the West Bank city of Nablus, early on October 18, 2015. (AFP)

Palestinians torched the site holy to Jews on Friday in an incident that threatened to further inflame tensions amid more than two weeks of unrest that has raised fears of a full-scale Palestinian uprising.

The incident overnight saw a group of about 30 religious students from a school in Jerusalem travel to Joseph's Tomb in the northern West Bank city of Nablus despite not having the required authorisation from Israel's military.

They told police they intended to repaint the shrine after the fire.

They were not reported to have been seriously injured.

A Palestinian security source denied that police had beat them but said that dozens of civilians arrived later and burned one of the cars used by the Jewish students. Israeli police also said one of their cars had been burned.

Most of the students fled, but five were arrested by Palestinian police and later handed over to Israeli authorities, according to Israeli police. The Palestinian source reported three arrested.

Those arrested were to be presented to a judge on accusations of violating a military order after being examined at hospital.

Israeli police called the students' visit "completely irresponsible" and said the incident "could have ended tragically".

Joseph's Tomb, inside a compound in the Palestinian refugee camp of Balata in Nablus, has been the scene of recurring violence between Israelis and Palestinians.

Many Jews believe it to be the final resting place of the biblical patriarch Joseph, while Muslims believe an Islamic cleric, Sheikh Yussef (Joseph) Dawiqat, was buried there two centuries ago.

The shrine is under Palestinian control and off-limits to Israelis except on escorted trips organised by the army.