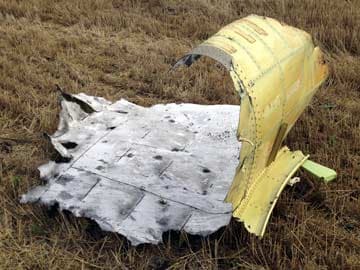 In a handout photo, a piece of wreckage from Malaysia Airlines Flight 17, in a field in eastern Ukraine, several miles from the largest concentration of debris

A piece of wreckage from the Malaysia Airlines Boeing 777-200 that was shot down in eastern Ukraine last week bears telltale marks of small pieces of high-velocity shrapnel that apparently crippled the jet in flight. Riddled with these perforations and buffeted by a blast wave as it flew high above the conflict zone, the plane then most likely sheared apart.

The wreckage, photographed by two reporters for The New York Times in a field several miles from where the largest concentration of the Boeing's debris settled, suggests that the destruction of the aircraft was caused by a supersonic missile that apparently exploded near the jet as it flew 33,000 feet above the ground, according to an analysis of the photographs by IHS Jane's, the defense consultancy.

The damage, including the shrapnel holes and blistered paint on a panel of the destroyed plane's exterior, is consistent with the effects of a fragmenting warhead carried by an SA-11 missile, known in Russian as a Buk, the type of missile that U.S. officials have said was the probable culprit in the downing of the plane.(Malaysian Airlines Downing Puts Spotlight on Buk Missile System)

It is impossible from these photographs of the damaged plane to determine what specific model of missile was used. But the SA-11 is a member of a class of weapon that carries a fragmenting warhead with a proximity fuze. If a missile like that functioned as designed, it would cause damage like that evident in the debris of Flight 17.

"The perforation holes that are visible indicate that they are consistent with a foreign object entering from the exterior of the aircraft to the interior of the aircraft, given the contour of the aluminum around a majority of the perforations as well as the visible blistering of the paint around some of the holes themselves," Reed Foster, an analyst at IHS Jane's, wrote in an assessment provided to The Times.

He added: "Most of the smaller holes look to be caused by a high-velocity projectile, as opposed to simple shearing or tearing caused by the forceful separation of the panel from the airframe."

Foster also noted that the shrapnel damage was different from what he would expect after an aircraft engine explosion, which could cause "longer, thinner, oblique tears across the aircraft skin."

His observations were consistent with the profile of surface-to-air anti-aircraft missiles designed to destroy fast-moving military aircraft at high elevations.

Rather than striking an aircraft directly, missiles in this class fly a course that is designed to intercept the targeted aircraft and explode beneath it, creating a cloud of shrapnel.

At the end of the missiles' flight, they act "more like a shotgun than a rifle," Foster said, adding: "one is attempting to put as many consistently sized, low-drag fragments into the airframe as possible."

Based on the capabilities of an SA-11, when pitted against a civilian passenger jet, which has no defenses against an incoming missile, the results would be devastating.

The SA-11 is large and far-reaching: Roughly 18 feet long and 1,500 pounds before launch, according to a U.S. ordnance document, its missiles can travel tens of thousands of feet into the air. Much of each missile's weight is taken up by the fuel required to propel the weapon to supersonic speeds, and to give it its altitude and range. (The Missile That Reportedly Shot Down Malaysia Airlines Plane: 10 Facts)

But behind each missile's antenna and guidance system is a warhead packed with 46 pounds of high explosive.

Standard military hand grenades often contain 2 to 7 ounces of explosive, depending on the model. Variants of 155-mm artillery shells often hold a little more than 20 pounds of explosives.

The explosive fill of an SA-11 is encased in a double sleeve of molded aluminum that has been preformed into a diamond-patterned grid, Foster said.

After the burnout of motors, the missile, which would then weigh about 800 pounds, would approach the targeted aircraft and a proximity fuze would detonate its warhead, causing its sleeves to shatter into diamond-shaped bits about the size of a quarter. Depending on the model, the standoff for the blast might be 30 to 100 meters, Foster said, or about 100 to 300 feet.

This design was intended by Soviet and Russian engineers to ensure hits against smaller, faster and highly maneuverable Western military aircraft, including fighter and attack jets. That way, even if the targeted aircraft eluded the missile or the direct effects of its blast wave, a piece of shrapnel from the cloud might be enough to damage an engine or sever fuel and hydraulic lines.

A large passenger jet flying at a consistent speed and an unchanging course would be a target of an entirely different sort than a fighter jet, and could be expected to be hit by the blast and a large load of the shrapnel.

In the minutes before it was struck, Flight 17 was traveling at a steady elevation and speed across Ukraine, according to data from FlightRadar24, an online flight tracker. Its passengers and crew would have settled into the tedious routines of a typical long-haul international flight.

Promoted
Listen to the latest songs, only on JioSaavn.com
The damage visible on the small piece of wreckage indicate a sudden end to the aircraft's journey: Its thin skin was riddled with shrapnel and rocked by the force of a nearby high-explosive blast, twice the power of the blast of a modern artillery shell.